Community has always been a priority for DJ Bone, whether in the Detroit neighborhood where he grew up, went to school and worked or at the many clubs where he held residencies. It was during one of those residencies in downtown Detroit when he decided to become involved with helping the homeless people in his area. “One day, instead of just giving them some spare change I started asking every single person what they actually needed.”

This adjustment in approach was the catalyst inspiring him to want to do/help more. He took it upon himself to do whatever he could whenever he could, buying meals, supplying toiletries, even raising the funds that helped a man with a disability purchase a prosthetic arm. In 2002 Bone met Ahnne (who is now his wife). Getting to know each other over several months he learned that Ahnne shared the same passion for helping those in need that he had. Her deeds spoke for themselves and they both knew it was a venture to continue together.

Ahnne, being the visionary behind Homeless Homies proposed forming the foundation. This way they could take it to the next level and help on a greater scale. They agreed that all proceeds from DJ Bone’s record label Subject Detroit (vinyl, digital and merchandise) would be directed to their Homeless Homies Foundation.

And now, here we are, fresh off the amazing success of their in-store charity drive last May 2019 during Movement weekend at Well Done Goods in Detroit, with the help of DJ Bone’s friends: Derrick May, Funster, Josh Wink and Seth Troxler (who wore his Homeless Homies shirt during his set at the festival and made it viral).

The day after the success of the Detroit donation drive, Dubfire graciously volunteered himself to the initiative and exchanged personal information with Ahnne and Bone’s. It is time for HH to do some good in Amsterdam.

Last June, Ahnne approached Kolja Verhage with the idea of hosting a Homeless Homies event during ADE. Right then, without hesitation, the two agreed on the event date and time; October 18, 2019 10AM to 8 PM and the ten-hour techno fundraiser was on the books.

Ahnne wasted no time contacted Bone’s friends; the immediate response was all overwhelmingly positive. “We had more artists than we have play times.” All artists performing are donating their sets. Them and their teams have been so kind and supportive. Everyone UNITED for a beautiful cause. team. Another Techno superstar (TBA) volunteered himself to the cause as well. We plan to enlist this person for the next HH event.

“I’ve known many of these artists for years, even decades but Ahnne did all the hard work. I’m extremely thankful for her and her vision and to have such generous and caring friends.”- DJ Bone

“Bone likes to remain very underground; we’re not rich, but we are comfortable. We have more than enough for ourselves, so we’ve decided to consciously dedicate time and effort to be of service to those without in kind. Compassion is why we are put on this earth. We have a five-year plan, by then, we hope to have our Homeless. Homies buildings in Detroit and Amsterdam where we live. Homeless Homies is just not going to be a homeless shelter, but we aim to offer free medical, dental, mental, work training, re-integration and re-entry to society as able individuals. We want to lift people back up to help get them back on their feet.” 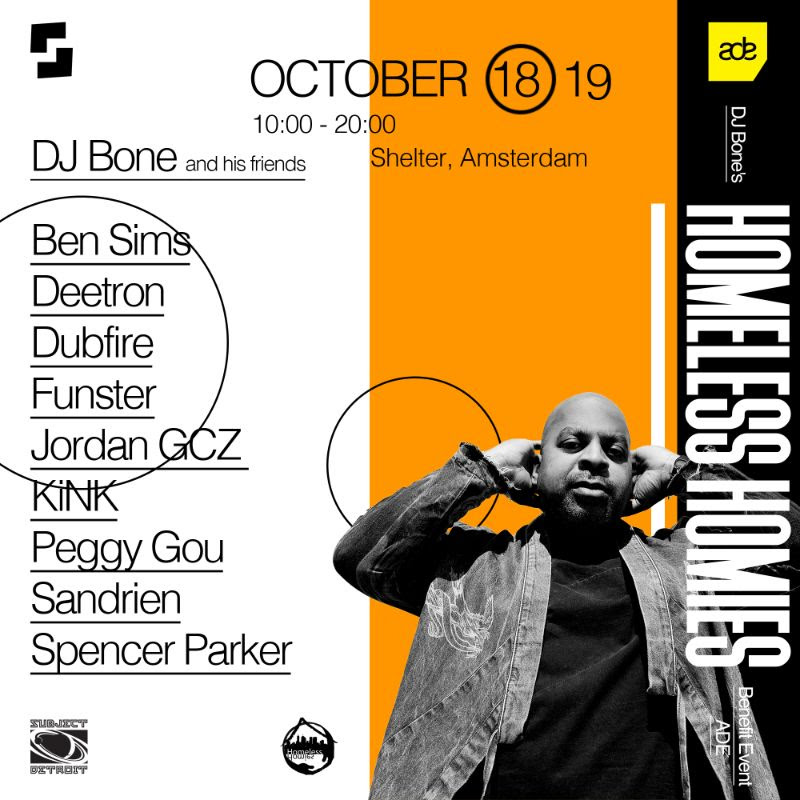