The Epic Pool Parties were one of the most talked about events of the Winter Music Conference in Miami. After this game-changing debut in 2019 they return to The Kimpton EPIC Hotel bigger and better in 2020 for six days of carefully programmed parties. There will be one unmissable party each day of the Conference from Tuesday March 17th to Sunday, March 22nd. The first ones to be announced are the WMC Official Opening Party with the legendary Kings of House, aka Louie Vega and David Morales, as well as Amnesia Presents x Do Not Sleep on Wednesday March 18 and a special Repopulate Mars day-night party on Friday March 20th.

Located in the heart of Downtown Miami, Kimpton EPIC Hotel is an urban hotel that exudes the beauty and essence of the city through unparalleled experiences and views of Biscayne Bay. The ultimate Miami getaway, Kimpton EPIC Hotel just got even better with the completion of a full redesign. On the heels of its 10th anniversary, extensive renovations of its guestrooms and suites, lobby and pool area were just debuted, setting the stage for the most EPIC WMC parties yet. The events will take place on the newly imagined 16th floor at the hotel’s pool deck overlooking the city, complete with palm trees, bars, and cabanas. It’s a venue like no other, complete with a world-class sound system ensuring every beat is as warm and clear as the skies above. 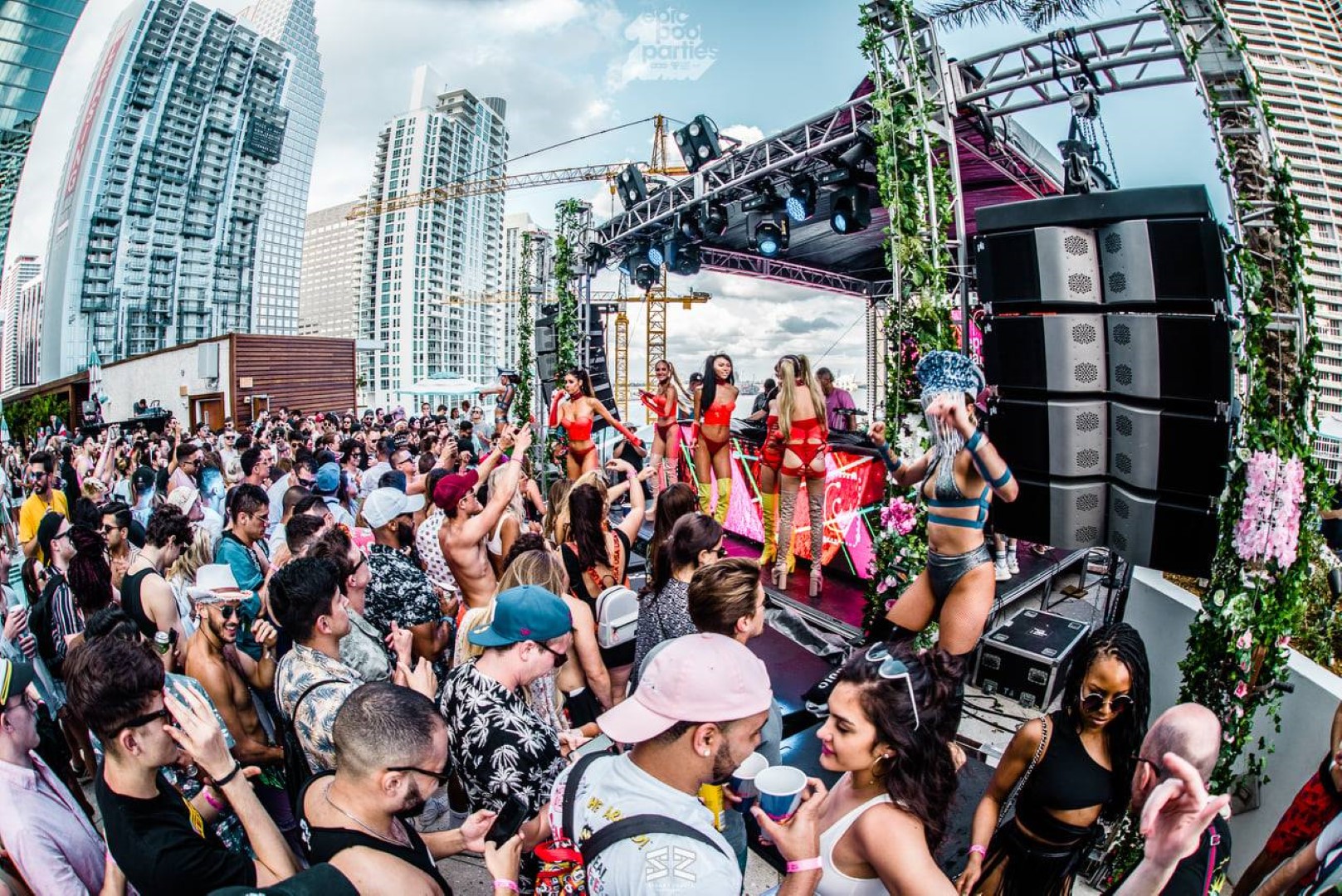 These carefully curated parties feature the worlds best DJs, brands and labels and come from the accomplished team at Electric Ibiza, who run iconic events at the White Isle’s most famous venues, from Amnesia to Ibiza Rocks, Café Mambo to Pacha and Space Ibiza. Here they work once more in partnership with Miami legend Jonathan Cowan, Square One and WMC. Last year, the likes of Kerri Chandler, Victor Calderone, MK, Defected, Do Not Sleep, Repopulate Mars and Claptone’s ‘The Masquerade’ all featured.

Say Jonathan Cowan on this year’s offerings: “After a few years hiatus from the Miami Music Week program, last year was a huge success. I feel the conference has really come back into its own these past few years and is back as an important part of the dance music calendar. 2020 Epic Week will be the best DJs and brands showcasing their talents with an amazing backdrop of downtown Miami, and with Ultra just a few blocks away, we sure are expecting another huge week of music.”

On March 17th the entire Winter Music Conference kicks off with the one and only Official Opening Party at The Epic, which also happens to fall on St Patrick’s Day, and the headliners couldn’t be more perfect: the Kings of House, aka Louie Vega and David Morales, have been there since day one, pioneering various forms of the genre from vocal and uplifting to more dark and driving. They have decades of knowledge and know how between them, vast arsenal of tunes to call upon to make sure the exact right beat plays at the exact right moment, and are sure to serve up a real masterclass to get this year’s conference and series under way.

Next up on Wednesday March 18th is one of Ibiza’s most iconic clubs, Amnesia, who team up with underground house party Do Not Sleep. As such you can expect the best in cutting edge house, slick tech sounds and electric atmospheres from some of the scene’s most essential and innovative talents. The party is in for a huge 2020 with a tour of Australia and New Zealand also planned, so expect them to pull out all the stops when they hit Miami. 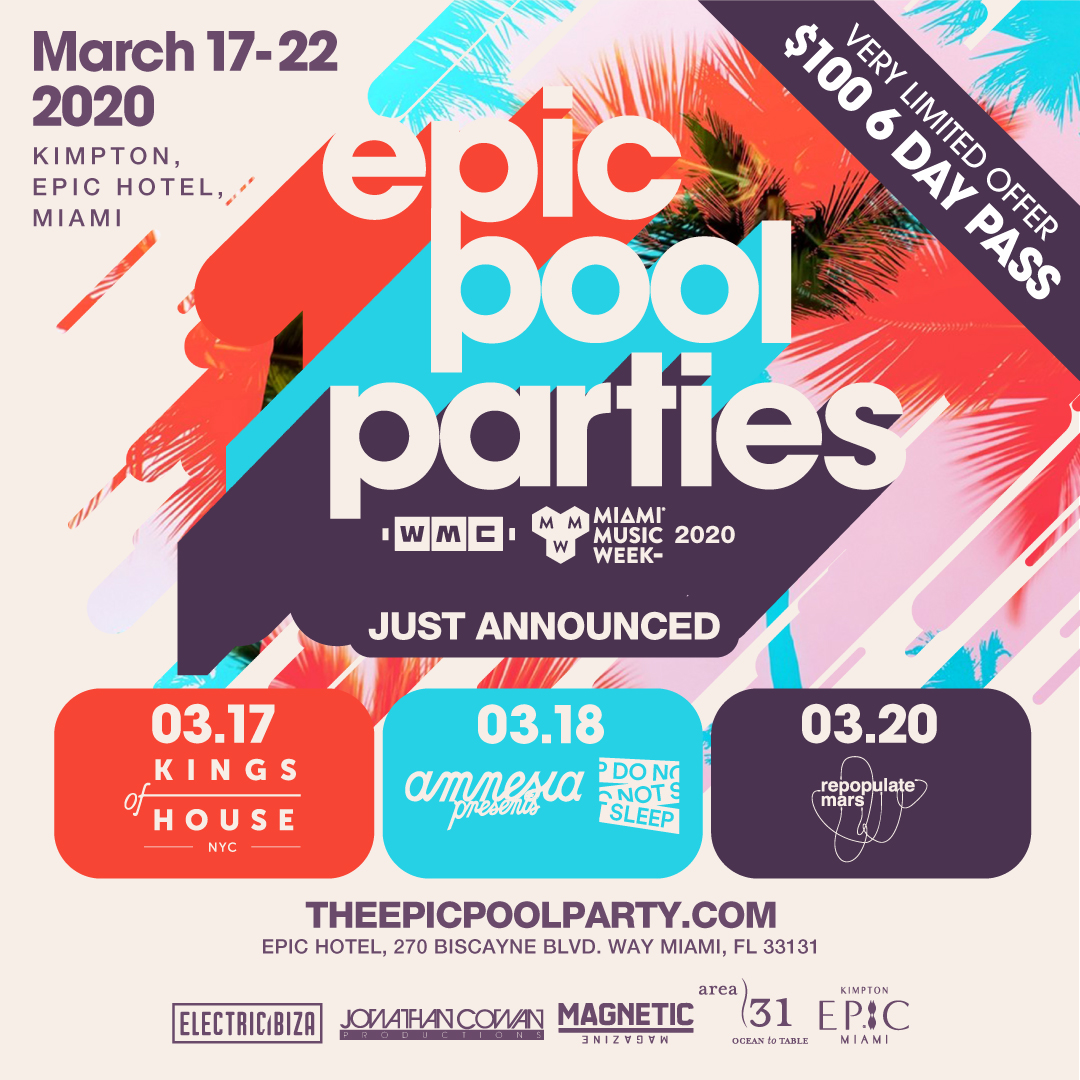 On March 20th, Lee Foss’s red hot Repopulate Mars label will bring its key talents to the Epic for an afternoon and early evening session of unrivalled house music. Last years show was a complete sell out with the label being known for its cosmic parties with extravagant production, fancy costumed characters and immersive performers. As well as releases from the main man Lee Foss, the label was a DJ Mag award winner in 2018 after boasting killer tunes from the likes of Latmum, Mason Maynard, Detlef and Solardo.

Says Lee Foss, “Repopulate Mars will rip open the fabric of space and time to return to Miami Music Week to host their intergalactic pool party on Mars at the Kimpton EPIC Hotel on Friday March 20th. Expect a day of outer space hedonism that will have punk funk kids shedding clothes, aliens shedding skin and cyborgs getting down to an electrifying line-up of the best names in house and techno.”

These Epic Pool Parties will be just that, and promise to be the most talked about dances during the whole of the WMC 2020. The next three shows and full line-ups will come in the next few weeks.