Holly Lester’s journey from a quiet corner of Ireland to the boisterous world of full-time DJing is something of a whirlwind. She is rapidly climbing the ladder, and she has quite the story to tell. Growing up in a rural, isolated area where “nobody was into dance music”, she was lucky enough to have a mentor in her father, whom she credits with instilling in her her lifelong love of the genre. As fate would have it, her parents met in Ibiza in 1988 – the Second Summer of Love – and her formative years were spent in a home filled with music. “My dad was a raver. There was a lot of music in our house of all kinds, but I happened to pick up on the electronic stuff. My sister got a guitar; I got a set of decks!”

After spending her teenage years honing her DJing skills in some unlikely places, bravely playing electro house to clientele who were used to country and chart music, Holly moved to Liverpool to attend uni. Choosing the city was no accident, as she was fully aware of the quality of the scene there (“I don’t know how my life would have turned out if I had’ve decided to go to another city”). She very quickly fell in with the Chibuku crew and began securing residencies. Two seasons in Ibiza soon followed, one of which included a stint with Sankeys, playing alongside the likes of KiNK and Danny Tenaglia, an experience she describes as “priceless”. A consistently upward career trajectory has seen her play Printworks, Warehouse Project, and the famously riotous Boiler Room at AVA.

In the midst of a recovery from a bout of ‘the plague’ (us Irish have a tendency to exaggerate – you wouldn’t understand), Holly meets Decoded at the second annual MINDS Festival in Belfast. MINDS is a small-scale, yet crucial, thoughtfully-conceived event where artists and punters get together to engage with issues surrounding mental health in the electronic music industry, to raise money for charity, and of course, to party. There is a real sense of amicable conglomeration, and conversations among friends and friends-to-be are warm and candid. There are few more immediate, pertinent issues in dance music just now, so I begin by asking Holly how she manages to keep on top of her own mental wellbeing in such an unconventional, fast-paced, often hedonistic world.

“To be honest I have struggled with balance a lot in the past, and it has come back to bite me in the ass quite a few times. So I’m conscious of maintaining that balance by doing things like yoga, meditation, running, and, just, actually doing nothing at all sometimes.”

The nature of freelancing is that one is one’s own boss, which carries with it different levels of discipline and responsibility, and that brings its own pressure. Sometimes ‘doing nothing at all’ is a luxury in and of itself.

“In my mind I’m always working. And because things are becoming more heavily focused around social media, I think it’s becoming harder for people who are doing this kind of job to switch off. Of course it’s important to keep your followers engaged but I think a lot of people fall into the trap of not taking time out. ” 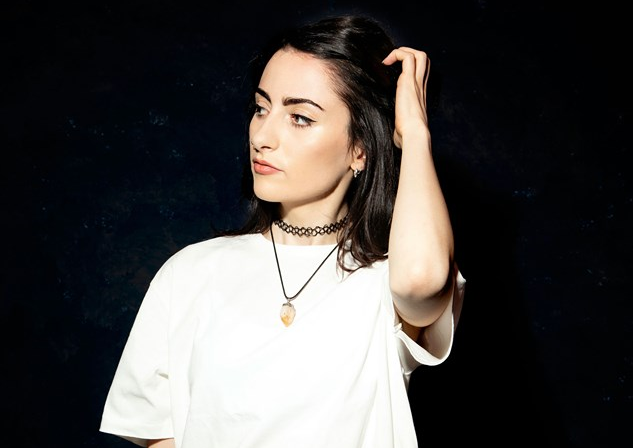 There is a toxicity that comes with being involved in, with and through social media, and strength of character is required to deflect all the negativity that can be so overwhelming for many. Holly speaks with assured self-awareness about this, and I wonder aloud if this clear stoicism and determination is something that she has drawn upon as her career has developed. “I always had that feeling, since I was about 14, and I still do. I think that’s what keeps artists going. It’s such a hard industry to be involved in and you have to have that little feeling inside of yourself that makes you believe you’re going to do it, because if you don’t, you’re definitely not going to do it!”

Holly is also conscious that this determination naturally goes hand in hand with more fragile inclinations, like nervousness, apprehension, and self-doubt. “I still get nervous, and those emotions were particularly strong when I stepped up to play Boiler Room last year. It’s never easy going out to play in front of hundreds, sometimes thousands of people. But it’s part of the whole experience. If you’re not nervous, there’s something wrong, because it should be taken seriously, and you should be a little bit frightened that you’re not going to play as well as you know you can. If you look at it positively, it’s energy that you can feed off and bring to your performance.”

Self-belief aside, what she has also drawn upon, particularly in recent times, is the sound of her childhood, the classic rave atmosphere that her father imbued the family home with.

“A lot of the stuff that I grew up with is influencing my sound now. My dad’s favourite track was A Guy Called Gerald’s ‘Voodoo Ray’, which unsurprisingly is also one of mine. He would have played a lot of Chicago house, acid house, early trance, breakbeat. Artists like the KLF, the Prodigy, Orbital, The Shamen, the Orb. That’s what I listened to as child and I still play some of these tracks out now. I’m definitely drawn to a lot of the sounds and styles from that era.”

I am immediately reminded of the old adage, ‘you don’t know where you’re going until you know where you’re from’. I explore this further with Holly, touching on the wildly positive reactions of young audiences to music that was around before some of them were even born, and perhaps opening the doors of time to a world when modern dance music was itself just a fledgling genre, with all manner of constant mutations and subgenres.

“It’s timeless. I mean, don’t get me wrong, I play a lot of new music, but a lot of the new tracks I play are also inspired by those same classic sounds in some way, the sounds that influenced me.”

Holly will also be bringing these influences to bear on her productions, which will neatly dovetail with the launch of her new label.

“I’ve been getting into production since 2015, treating it as a hobby more than anything, if I’m honest. But this year I’ve been taking it a lot more seriously. I’m hoping to release my own productions on the label at some point next year.”

Launching a label is something of a pet project for Holly in more ways than one. Mindful of the current discussions and debates surrounding gender and sexuality within dance music, she is hoping to reach out to female and non-binary artists who feel that they might not be taken seriously by a label, or feel like they’re not good enough, thus err on the side of caution when presenting their work. However, she is keen to point out that the label won’t be exclusive or gender-specific and will instead focus on interconnection and collaboration. Without wanting to give too much away, she tells me that more will be revealed in the coming months.

Holly is very much defined by balance. Taking on the future, ever acknowledging the past; eschewing gender stereotypes by promoting symbiosis; a country girl living the city life. This sense of equilibrium has stood her in good stead thus far, and can be the rock she leans upon as her star continues to rise in this vortex of an industry.

Mark has been in love with electronic music since hearing Jean Michel Jarre's "Oxegene" at an early age. He has been DJing for over 15 years and has played all over his hometown, Lurgan. He also obtained a degree in Music Technology from Belfast's prestigious Queen's University. Has an (as yet) unfulfilled ambition make a pilgrimage to Chicago, the birthplace of house.