From being handed a white label of The Bells by Jeff Mills in 1996, to why he is praying for rain for next year’s Glastonbury, reviving the 70s with Salsoul disco re-edits, to the hint of a Late Nite Tuff Guy live show, we find out exactly what makes Cam Bianchetti tick.

On an especially warm spring day back in his home city of Adelaide, Cam Bianchetti is feeling the burn. Understandably jet-lagged on the back of a 31-date European and North American tour, there’s little wonder he’s feeling a bit worn out. “It’s always good to be back”, he says. “I escaped Europe just before it started snowing.”

Spearheading the disco revolution with gusto, our unlikely hero has never been coerced into a pair of spandex flares and shies away from the flamboyance of his adopted genre. Despite the glitter crust of what he plays, Late Nite Tuff Guy’s happy place is pressure cooked in dark corners in the underbelly of clubs, without a sequin in sight. “Sub Club in Glasgow is a highlight for me every time, anyone who’s ever been there, or played there, will know what I mean. There’s magic between those walls.”

Understandably, Late Nite Tuff Guy has a soft, smooshy spot for those big dirty cities in the North of the UK. And not just because of their impressive ability to wear what Australians wear to the beach in the unmatchable depths of British winter. “It’s certainly brave,” he laughs. “I’m usually the only one wearing a huge jacket.”

“Manchester, Newcastle, Glasgow”, he lists fondly. “I just love them. The crowds always deliver that something special.” While dirty warehouses and northern grit certainly sound like the perfect habitat for a techno DJ like Late Nite Tuff Guy’s former alias, DJ HMC, surely wouldn’t disco be more at home with mirrorballs and fabulousness? “It’s a good question,” he says. “Disco certainly does sound like it needs to be played in a glamorous setting where everyone is drinking cocktails. But I’ve had great results blasting it through a crazy sound system in underground clubs – people go crazy for it. Even as DJ HMC, I wasn’t a huge fan of being the centre of attention. I’m no show pony. The older I get, the less I want to be in the limelight. I even find it difficult to be on stage.” 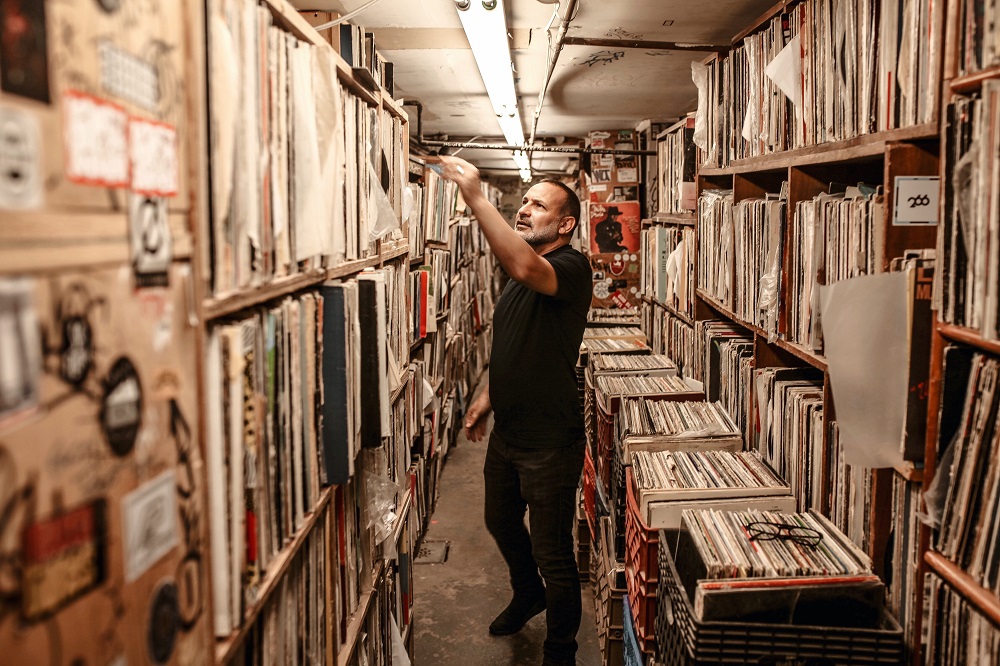 “My real passion for disco began when I was feeling a bit jaded and stopped DJing as HMC. I got to work in the studio and started editing all these disco tracks. I wanted to play 70s records alongside house music, but of course, the frequency is completely different. The intention was to edit so they could work within a set, without making them sound too different and losing their integrity. It’s been a real pleasure to create a contemporary update for people who are not aware of that music. On tours, I get a lot of young people who come up to me saying “you have ignited a love for different music”. It doesn’t get more fulfilling than that.” Late Nite Tuff Guy’s broad appeal appears to transcend age. It’s reassuring to see such a diverse contemporary appeal for the roots of the music that started everything we know and stomp our feet to today.

“I recently played a classic disco gig in Leeds – there were so many super young people there losing their shit, some could have only just turned 18. Even their parents wouldn’t have been old enough to be in the original disco generation. For these kids, the “old” was truly “new”.

It’s great to see young people who are genuinely excited by music and the roots of music, those who don’t buy into the crap that is being forced down their throat by the juggernaut of commercial mainstream music. There’s so much light.”

One of Late Nite Tuff Guy’s proudest projects of late is his prolific re-edit series for New York 70s disco label Salsoul. “My first releases for them were “Everyman” and “Dr Love”. I’d done a few edits, which someone at Salsoul heard and asked if I wanted to do an official release. That’s any DJ’s dream right there to have a re-edit on one of the major labels that inspired them.”

Heading to NYC, the home of Salsoul and Studio 54, for the first time in September, Late Nite Tuff Guy fell head over heels in love. So much so that he even found himself out of his comfort zone, in the glitteriest of grottoes, playing Brooklyn technicolour cabaret club House of Yes. “I think it’s a bit like Paradise Garage may have been; a super cool club with theatrics, drag shows and people quite literally swinging from the chandeliers. There are so many amazing DJs and music stories to have come out of that city. I’d love to call it home one day.”

Late Nite Tuff Guy enjoys writing the score to his own music. Prince has always been close to his heart, and his tribute show, which was launched in a strange twist of fate a number of years before the artist’s tragic passing, has clocked up global acclaim. “I was in no way jumping on a bandwagon with that project, or cashing in on something else,” he says with conviction. 2019 saw him take the show to Glastonbury, where he had the honour of playing the British behemoth for the first time. “I was playing at the Spike stage, a magical location underneath a huge tree. With hundreds of people pouring in, it felt like we were in a giant treehouse. It was a pleasure to play to such a diverse audience.” 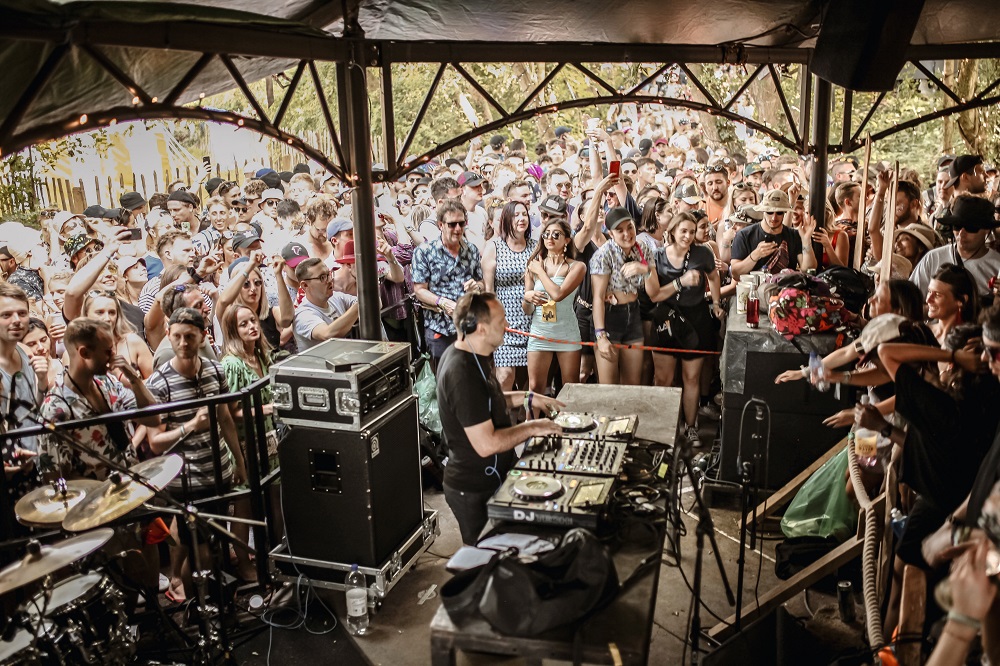 Despite being ‘up there in the top five gigs of his career’ Late Nite Tuff Guy’s Glastonbury experience left him feeling somewhat short-changed. “I heard it was the hottest Glasto on record this year. It felt like we were in the Australian bush, cooking in 35 degrees. It almost reminded me of being at Rainbow Serpent – I even got sunburnt! I’d been expecting the trademark mud and grey skies but it was completely the opposite.” But hungry for disco gunk, he is already champing at the bit to get his gumboots Glasto-grimed next year. And that’s not all. He’s bringing tunes, whether he’s booked for a set or not.

“I’ve already bought my ticket for the 50th anniversary. I was lucky enough to be asked to play this year but didn’t want to risk not being there if I didn’t get booked again. Whatever happens, I’m just going to show up and play some tunes anyway!”

Tuff by name and tuff by nature, there’s not been any downtime between tours, with our man jumping feet first into a back-to-back Australian touring schedule as summer heats up. He will be at Lost Paradise and Beyond the Valley for New Year. Joining a stellar lineup of techno heavyweights, he’s hitting Pitch and Subsonic. And he enjoyed bringing his disco dayze to huge crowds in the oh-so-very refined Grapevine Gathering across three of Australia’s finest wineries last month. “It was great to do multiple dates with both Two Door Cinema Club and Flight Facilities at Grapevine Gathering. I’ve done official remixes for both acts.’ Sounds like a great way to kick off the summer season.”

With an impressive collection of over 10,000 records that he has been amassing since the age of 13, there must be a lot of stories behind plenty of his prized possessions. One of his favourites is a tale that would make any techno aficionado tingly all over. The year is 1996. A young DJ HMC is playing before Jeff Mills at Adelaide University. ‘Anyone who knows Jeff knows he is a man of few words. He handed me a white label test pressing of The Bells and nodded his head. That night was the first time I ever heard it. When you think of Jeff you think of that track, even 20 years later. That was a defining career moment.’ 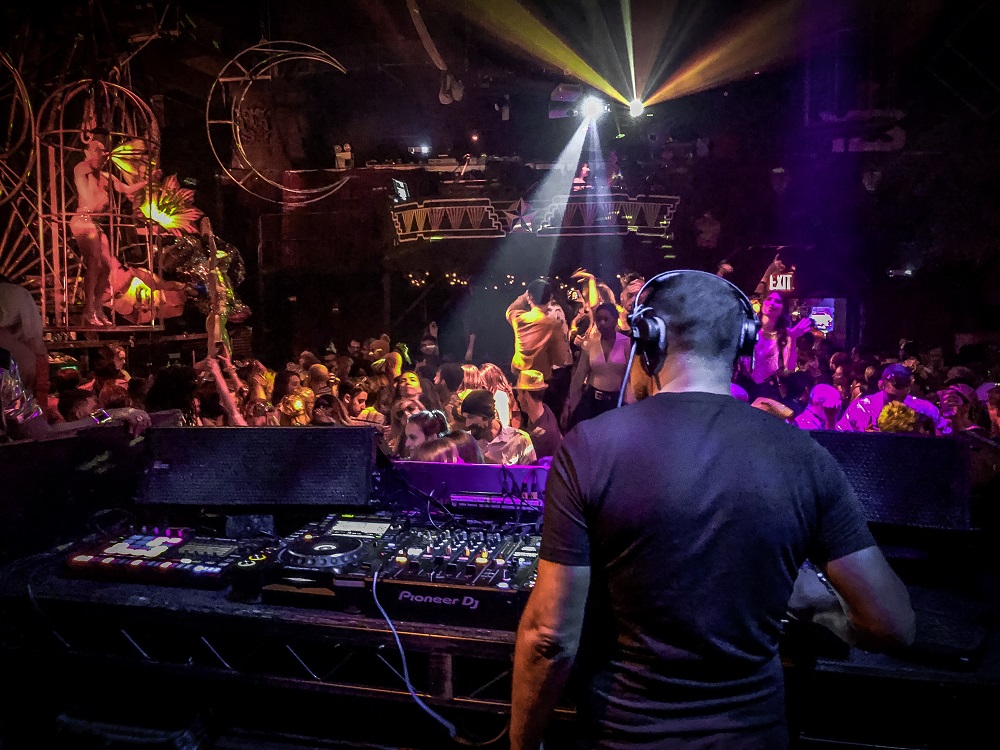 After all that techno teasing, the question on everyone’s lips… is there any likelihood of a DJ HMC techno revival? There’s still an obvious love and commitment across the spectrum of BPM. “I’m not sure if now is the right time to produce anything as DJ HMC. Most of my time is taken up as Late Nite Tuff Guy at the moment. I have been in talks with both Australian and international DJs about the prospect of doing some reissues. I’d love to get some older DJ HMC tracks remixed and reissued. It would be great to share the older stuff with the new, younger techno community so they can enjoy it too.”

As you would expect, the future looks both busy and bright for Late Nite Tuff Guy for 2020, but time pressures halt some projects he’s like to get off the ground. As we all know, a busy, subterranean and nocturnal lifestyle can make it hard to reboot to being a different kind of productive in the weekdays. “Being on the road so much just means it’s been impossible to get back in the studio. You can’t just turn the creativity button on. In an ideal world, I’d love to get an original disco album off the ground. I’d love to write my own songs – real long players – and have guest keyboards, guitars, bass and vocalists to put it all together.”

A Late Nite Tuff Guy live show may be on the cards for 2020, ladies and gentlemen, you heard it here first!

Kate Stephenson's dangerous obsession with music and words has taken her to every corner of the globe in the quest for the filthiest bassline. Heralding from the mean streets of Harrogate in North Yorkshire, England, she earned her raving stripes in the early 2000s at celestial institutions like Back to Basics in Leeds and Bugged Out in Liverpool, standing in queues snaking for hours round the block in freezing February nights before she knew how to hustle a guestie.

Having decamped to (slightly) more clement temperatures, Kate now calls the outstanding city of Melbourne home, feeling oh-so-very-welcome in a place where you are actively encouraged to party from Thursday to Tuesday. Kate stays alive on a strict diet of techno,jungle drum and bass and cheeky garage remixes, smooshed in with a little bit of everything in between. You can either find her with hands in the air, by the front left speaker or typing up a storm in bed drinking Yorkshire Tea by the gallon.