A rich menagerie of music, culture, art, cuisine, and community, we invite you to let go of the year that was and lean into the future that will be. The antithesis of time spent alone; our playground is a space for you to explore your senses via an evolved experience. Through our gargantuan front gates, down winding garden paths, past our historic mansion and amongst a sea of smiling faces, you’ll witness kaleidoscopic stages, rumbling speakers, sprawling artworks and hidden treasures. Bring old friends, make new ones, and step into a space that relishes your complete immersion of the creative experience. We’ve been waiting a long time to reunite with you. Never before has a union felt more special. Let’s celebrate. Now is the time to have your cake and eat it too.

No doubt it’s been an arduous year for everyone. And with all festivals on hiatus, it foreshadowed an even more testing time for the music industry. But for the Let Them Eat Cake team, that meant regroup and aim to be the first Victorian festival to announce their return. As Let Them Eat Cake director Daniel Teuma explains, there is not much you can do but take it day by day: ‘Yes, it’s been hard. Not doing the festival in 2021 was a real blow for our team. However, we focussed on staying positive by making practical use of this time. We want to ensure this is our best one yet.’

For Teuma and his team, that meant initiating discussions on the current state of the event, a bottom-up re-take if you will: ‘We used the break to fine-tune the festival’s finer points, really assess where we’re at and what we want to do.’ And the team feels invigorated and ready to roll out their most exciting edition yet. ‘We’re looking to tie everything together. The overall experience will feel way more cohesive: from the artwork to the visuals to the food.’ And of course the music.

And with first and second release tickets already sold out, the lineup announcement should push this towards a sell-out… 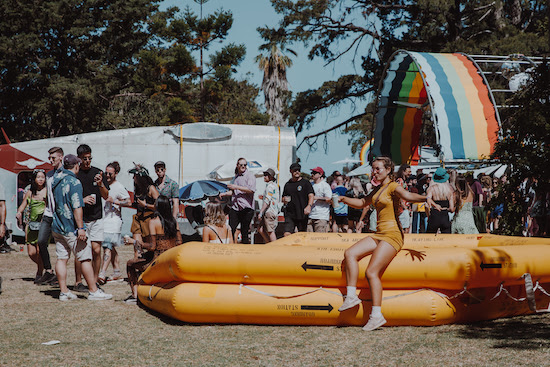 The 2022 lineup will have a focus on local talent alongside an increased presence of live acts. Leading the pack is Confidence Man, ‘unarguably’ one of the hottest acts on the planet right now, alongside 6-man band and bona fide party machine Northeast Party House. Both acts are known for their raucous live shows and are set to raise the Werribee Mansion temperature. With over 50 million plays, Young Franco is easily one of the brightest new Australian talents.

Also featured on the lineup is Australian dance royalty in Late Nite Tuff Guy and CC:Disco!, both acts known for their refined disco pedigree. The pandemic has been tough on artists, but if anyone has somehow managed to ignite their career it would be classic trance don Papa Smurf. The cosmic, Italo-disco cuts from the UK’s Hidden Spheres led him to become an underground favourite, and now he is set to become a Let Them Eat Cake highlight too.

Awakenings is celebrating their 25th anniversary in 2022 and is planning to go all out….