Lost Desert is an artist that likes to keep an element of mystery about him. Just a quick glance at his social media pages tells you that. There are not pages and pages of the man talking about himself and how great he is like many of the other artists out there and I must admit, I find it pleasantly refreshing. If you know anything about good quality, proper deep house music, you will no doubt of heard of this man and his sublime work on Lee Burridge’s All Day I Dream label. He has recently just completed an LP with the label boss himself entitled ‘Melt’ and, as you might expect, it is a dream-like journey through some beautiful luscious deep music. I got the opportunity to speak with Lost Desert himself a few weeks back and grabbed at the chance to hear what he had to say about working with Lee Burridge, All Day I Dream, and his music.

When I spoke with Lost Desert he had just had his coffee and breakfast and was just about ready to function for the day ahead so thought I would start off the questions a little gentle to ease him into the chat. I asked him how he first got into the scene and electronic music… “Oh some 3 decades ago I came across some music we called new wave; it was a blend between traditional guitar and vocal and electronic drums and synth sound that were out of this world.”

To be honest I thought I was awake and on the ball ahead of this chat but made my first mistake when I fell for a Chinese whisper of a story I had heard about how he met Lee Burridge. I had heard that they had met whilst Lee Burridge was on a trip to the Democratic Republic of Congo, and I was way off… Lost Desert went on to explain how they really met… “we met at a party called “Edge” in Belgium. I was lucky to be playing the warmup for Lee that day; I remember the first hour we opened playing for some lost souls starting to come in and two people on the dance floor, one being my friend Eran Aviner (the promoter) and Lee. After I finished my opening set Lee asked who I was and what was the music I was playing. 6 hours later we ended up in the studio at my home listening to some of my older productions.” I personally think the real story is better than the myth so not all bad!

I went on to ask the man how the idea behind the ‘Melt’ LP first came about… “some 3 years ago, we had so many new tracks at one time, also the idea of making a dull story for All Day I Dream fans intrigued me.” Lost Desert went on to answer my question about what the concept was behind the album… “I really don’t start with a concept to be honest, it’s only when some of the tracks get born and you listen in various order some kind of story forms, then I like to add some specific tracks to get a full picture.” Knowing that Lee Burridge is often travelling all over the globe and a very busy man I asked how the album was constructed, and if most of it was done remotely… “Lee is a very busy man, even more than I realised in the beginning. So the demo ideas are written by me, but that is just the beginning. I can make 10 of those in a week, then a long production, arrangements, and the mixing process happens where Lee gives feedback. He can be on the other side of the world but still be 3 feet away on my laptop, so we can chat for hours and even make changes Lee suggests to get to what I call a Playmaster. It is so important to be able to play the new ideas, that’s really the only moment where you know it’s a hit or miss!! To get to a final product of the ‘Melt’ album, Lee came and spent some days and late nights at our house and studio.” I asked Lost Desert what was it like working with Lee on the LP and if they had any little meltdowns (slight pun there sorry)…

“No, I think we are old enough to listen to each others’ ideas, comments and feedback. Of course, it is not always easy to kill some of our darlings, but you can’t make a 40 track album.”

With all this studio chat I asked Lost Desert what some of his favourite studio gear is… “I work on LOGIC DAW if that is what you mean. We work a lot with the Spectrasonic plugin, and we have a new toy called MOOG ONE!! I often start with basic samples for drums but love to add some real studio noises, be it recording rain when it falls on my studio window, or recording little bags of herb seeds as different shakers. Recording little bits with a microphone just gives a vibe on a track .” I asked Lost Desert if he is a man that likes to work on his music on the road or whether he prefers the studio…

“I never work on a laptop. I need my studio space and toys to get into a creative mode. I can’t see myself writing strings like “Fall Of Innocence” on a plane; the passengers next to me would not like the 4-octave keyboard on their laps.”

When in the studio I asked Lost Desert if he had a particular workflow to writing a track… “I used to start with drums all the time, but I got tired of doing that. Now I like to find the music first — it gives me more freedom. It’s funny how an idea or melody’s vibe can change by trying different drums.” 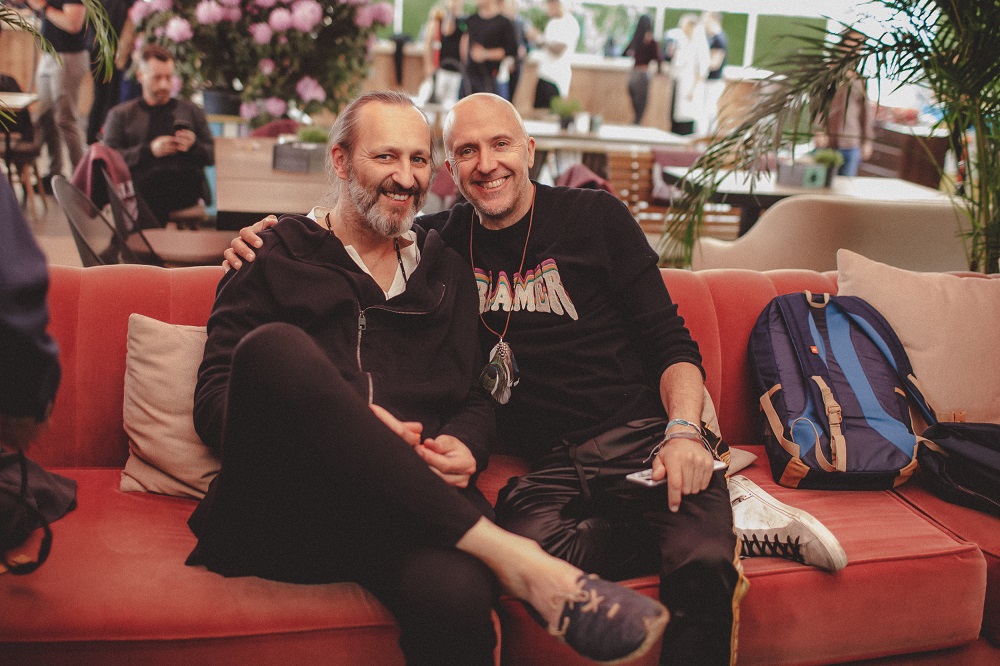 Moving away from the studio chat for and moving towards the DJ side,  asked Lost Desert what it was that made All Day I Dream parties so special… “I like to think it’s the absence of certain (annoying) things in other genres of music… for example, an ever returning snare roll and white noise that some still think is needed to get the people shouting and raising their hands. At All Day I Dream you can, but you don’t have to; you may, but it’s not a must. A hug is better than a shout, so closing your eyes and getting lost in a dreamy break with a big smile. We see this on so many faces! And going home with that melody in your head of that track — ID please!!!” Certainly something I would not disagree with… Lost Desert recently played at the All Day I Dream party at Go Beach Club in Barcelona. I asked him about some of his highlights… “Yes loved that gig. Facundo opened so perfectly, and the set just felt great, one of those days where it all falls into place, my personal highlights where a Bonafide remix of a track called ‘Bloesem’, and my re-edit of DSF, his great track called ‘Mystika’.

I went on to ask Lost Desert about some of his most and least favourite moments so far at All Day I Dream parties… “That’s a tricky one, for me, the best ones so far are without a doubt Oakland San Francisco 2017, Bloemendaal NL 2018 , Moscow 2019 and Barcelona at Go beach 2019. To be honest I can’t recall a bad one. We don’t need to have a big crowd to have a great daydream; some sets just feel more natural and some crowds express their emotions in various ways. I sometimes feel I missed the mark but then get so much love after the set.”

Moving back to the man’s music, I asked Lost Desert what we could expect to hear from him in terms of new music in 2019 and he delivered some very exciting news… “besides making new tracks with Lee I’m in the process of starting a new label called ‘SOUKSONIC’.” That is something I will be very intrigued to check out as I am sure many of you agree…

Before we parted ways I asked Lost Desert if he could have created any soundtrack to a movie past or present, which would it be? “I’m not a movie person, to be honest; I don’t have the patience and often fall asleep. Weird to say because I would love to try and make music for movies or the Netflix series, Hold On! I wish I wrote the music for  the new ‘Yesterday’ movie.” Lost Desert laughed and he thanked me for my time. Before he went on his way he said… “I would like to say thank you and give a big hug to all the daydreamers who support our music and Lee’s vision of All Day I Dream. You changed my life!”

I would like to thank Lost Desert for his time and hope his new LP, ‘Melt’ gets all the love it deserves. It really is a fine piece of work with Lee Burridge.

You can buy the ‘Melt’ LP on All Day I Dream here.

We are very sad to share the following statement from Andrew Weatherall's management: "We are deeply sorry. Continue reading