Lost Village is widely considered to be one of the most unique, interesting and creative festivals on the planet. A surreal fever-dream experience where no two years are the same. On entering the forest, Villagers embark on a network of winding pathways. Whether dancing on planes in an overgrown airport, venturing through the confines of a rusting junkyard or stumbling upon derelict houses – Lost Village is for the curious, not the cautious.

Every year Lost Village invites an abundance of the most important and innovative bands and DJs; creating a sonic tapestry that lilts between red-hot emerging names and established luminaries in equal measure. A dynamic and gender balanced assembly of artists combine to create the perfect score for a lost weekend. After announcing their reformation in late 2019, Bombay Bicycle Club have once again captured the hearts of music fans the world over. Their evergreen melodies, polymath instrumentation and articulate storytelling are once again in full force on Everything Else Has Gone Wrong – their new critically acclaimed album that’s amassing streams in the millions.

Four Tet has consistently defied formulas and trends for the last 20 years. Now firmly in the upper echelons of electronic music with recent single ‘Baby’ dropped just last week, his tenacious approach to artistic originality make his performances unmissable and unpredictable. His last appearance at Lost Village is still being talked about today – his return is something everyone has been wishing for since.

Another artist who has unquestionably reshaped the world of electronic music is Bonobo. Since the inception of Lost Village there has been one artist who has constantly been requested and widely considered as one of the most fitting names to accompany a weekend in the woods. The prophets have spoken and 2020 sees Bonobo make his Lost Village debut. Kojey Radical’s ever-evolving sound, mesmerising live performances and sky-high charisma have positioned him as one of the most vital UK artists of our time. His most recent Cashmere Tears album spans conscious rap, funk, spoken word and beyond, as he flexes his creative muscles to a whole new level. Another unmissable Lost Village moment.

The aforementioned names are but a snapshot of the Lost Village landscape. With huge names such as Floating Points, Honey Dijon, Django Django and Dixon appearing alongside rising stars such as India Jordan, TSHA, Arlo Parks and Eris Drew, it’s easy to see why Lost Village has become such an exciting proposition.

A WEEKEND OF ARTS AND EXPERIENCE

Intertwined with the musical offerings, Lost VIllage is renowned for taking things beyond the usual festival standards, and it’s the festival’s attention to detail that make it so special. From lazy afternoons at the Tribal Banquet, which has previously seen the likes of Hawksmoor, Temper and Tommy Banks take the reigns, to Dishoom’s one and only festival outpost; exceptional food has always been at the heart of the Lost Village experience.

Within the Lost Theatre, you’ll encounter an amazing lineup of comedy (previously playing host to the likes of Katherine Ryan, Russell Kane, Joe Lycett and more), while over at the Institute Of Curious Minds you’ll discover a series of in-depth talks, traversing music, arts, psychology, sociopolitics and beyond. Given the tranquil surroundings, relaxation is an intrinsic part of the Lost Village experience. The lakeside Energy Garden offers yoga, massage, mindfulness classes, wood-fired hot tubs, holistic therapies and a quiet place to retreat, regroup and rebalance.

Elsewhere you’ll find an array of free creative workshops, cocktail masterclasses, a vintage clothing market and a seemingly endless world of discoveries, experiences and kindred spirits. With a second announcement for Lost Village 2020 set to drop in the coming weeks, stay tuned for more musical artists, a huge lineup of acclaimed comedians, an array of boundary-pushing chefs and restaurants, talks, live interviews, workshops, masterclasses and much more.

The woods are waiting… 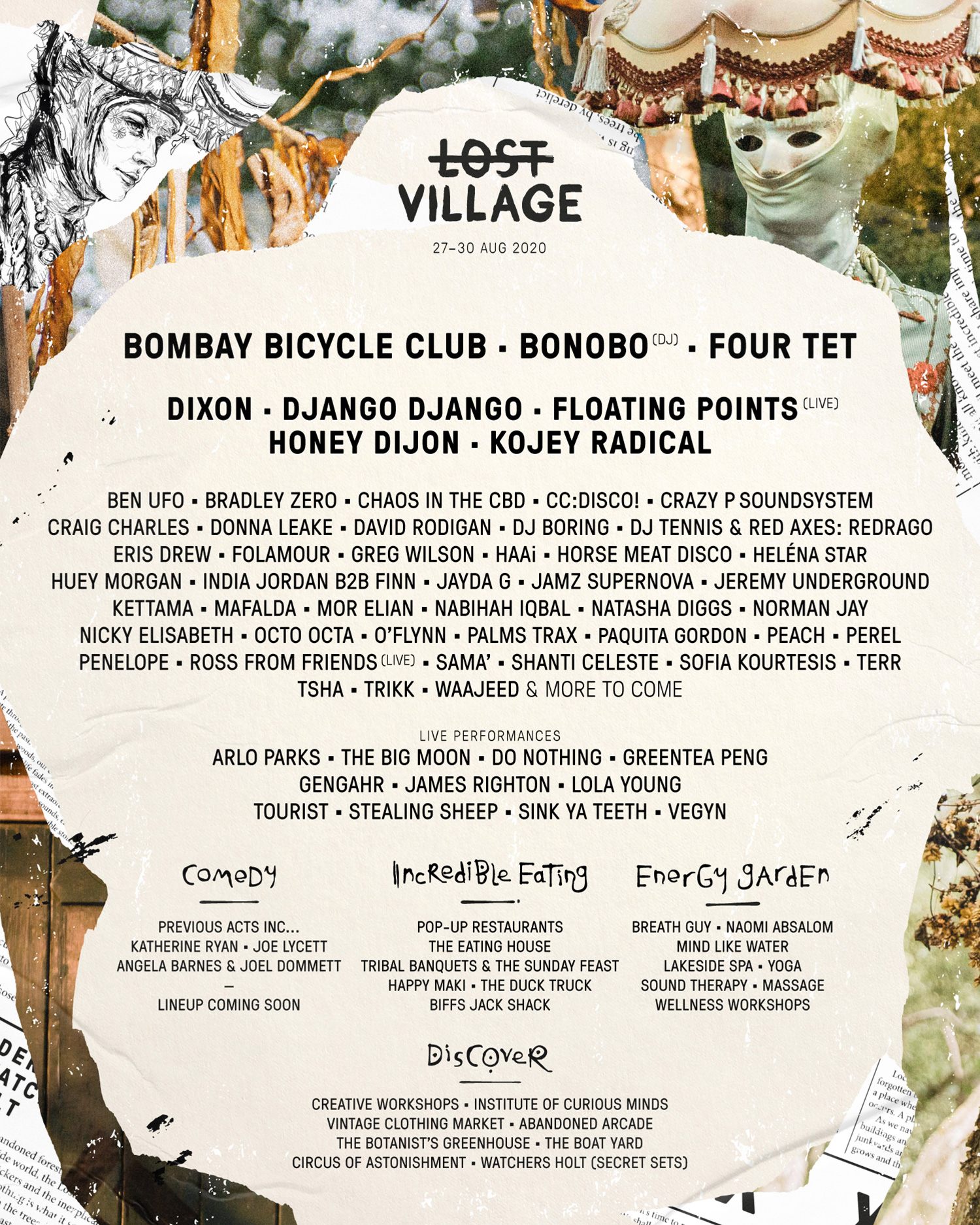