With preparations underway for the launch of Printworks‘ Autumn-Winter Season, the music institution has unveiled a groundbreaking new design campaign, combining animated, 3D typography with augmented reality (AR). Augmented Reality is a technique that superimposes a computer-generated image onto a view of the real world. Harnessing this technology, the new series of interactive, typographic designs come to life when viewed through a phone camera via the new Printworks’ AR App.

This technology offers the ability to move around the image, exploring it from every angle for a truly three-dimensional experience that is different every time.

In their constant pursuit to engage audiences in new and surprising ways, Printworks’ AW19 campaign will explore the theme of movement with animations that give a nod to mechanical processes and Printworks’ heritage as Western Europe’s largest printing factory. Each design is inspired by the machinery of the printing presses that, to this day, still reside within Printworks’ iconic Press Halls, providing a striking, industrial backdrop to so many celebrated dancefloor moments.

For the first time ever, Printworks are also offering the chance to win one of five full AW19 season passes, with each pass granting entry for 2 people to any and all shows across the official AW19 season. To enter, simply record and post a video clip of your interaction with their AR designs to social media using the Printworks AR App and the hashtag #PrintworksAW19.

The artwork for this season was created by the award-winning OMSE design agency. Based in London Fields, OMSE/OMSETYPE is an independent design agency and type foundry who have been experimenting with AR to combine type and 3D animation in a new and unique format. Their first AR project was a typography exhibition titled ‘Agenda 2020’, held to promote the launch of a new typeface. The project won a ‘Best in Book’ prize at the 2019 Creative Review Awards and broke new ground, demonstrating what was possible for this emerging technology.

OMSE have taken the expertise and technology from that project into a new campaign for Printworks London, combining augmented reality with print and outdoor advertising. A custom-built app for iOS and Android allows people to experience the Printworks AW19 campaign in AR, revealing complex, immersive animations and hidden information.

The creative builds on the theme of the revolving printing press concept that is at the core of Printworks’ brand identity, taking it into a new world of 3D, moving typography. The project is one of the first applications to show how AR could be combined with traditional media to provide new and engaging experiences.

“We’re very excited to launch the Printworks AW19 campaign artwork. We’re always looking for news ways to innovate and engage. This campaign really achieves this, as well as joining the dots between Printworks past and future, but creating printed analog designs that can be viewed in a digital world.”

“We’re excited to have worked with Printworks to create one of the first examples of how AR can be combined with traditional media to provide new and engaging experiences. The campaign builds on the printing press concept behind the Printworks identity taking it into a new world of 3D AR typography”

Giant billboards showcasing the new designs are appearing across London this week. A full gallery of the designs will also be made available online at a later date.

To download the app and experience the design in its full 3D, AR glory, simply visit www.printworkslondon.co.uk/AR on your phone browser.

For a chance to win a full AW19 season pass, share a video clip of the AR billboards with the hashtag #PrintworksAW19

Printworks London will announce their biggest season to date on Tuesday 13th August 2019. Preview the image below in Augmented Reality using the Printworks AR app and be sure to keep your eyes peeled for the outdoor campaign where these images can be viewed full scale. 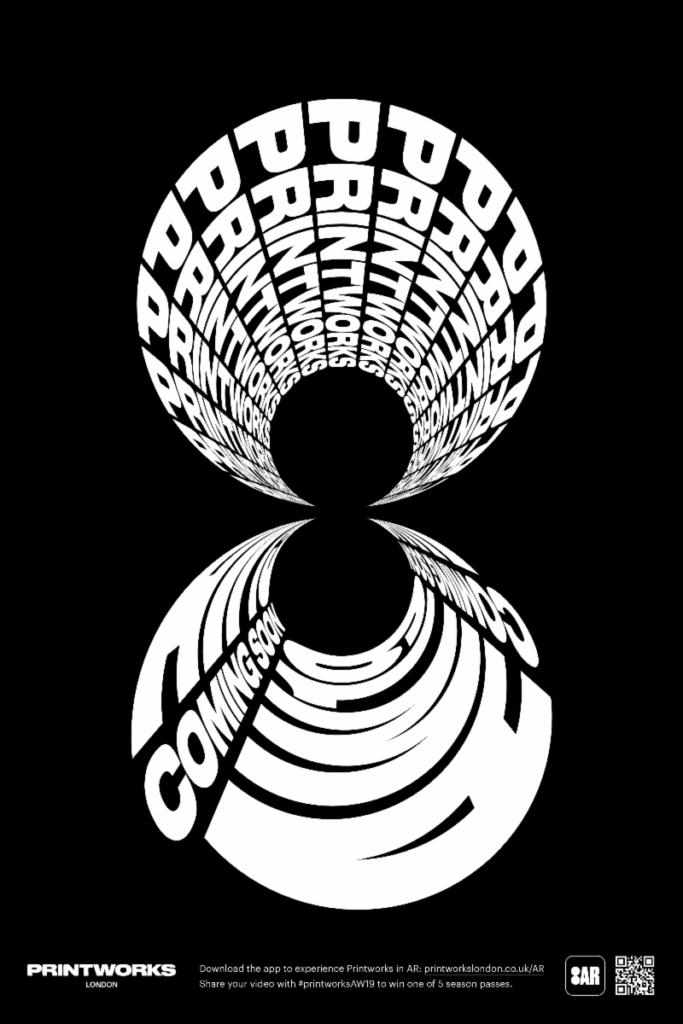