When I was invited to attend Riverside Festival it was an opportunity that could not be missed. It was a good opportunity to catch up with some industry folk and take the girlfriend, Jade up to Scotland for the first time… Well she is a Southerner so they often don’t like to go too far up the country. Anyway, little did I know at the time of saying yes that I would be sat on a replacement bus from Lockerbie to Glasgow but you have to take the rough with the smooth, and who doesn’t like a good rave pilgrimage from time to time. The lineup for the festival was as good as I have seen anywhere and I had already picked out my list of must-see artists. Upon arriving in Glasgow it was dry so I think this led me into a false sense of security. We quickly checked into the hotel and made our way down to the festival which is by Riverside Museum near the SECC. Upon arrival, we met Jenn (Electric Shores). Jenn worked like an absolute machine all weekend shepherding artists around and trying to manage slightly inebriated folk, myself included. She gave us our passes and led us into the backstage area where we met Lydia (Lydia Laws PR), and her mates Pete and Stacey. We all had that nervous excitement about the weekend ahead, so we wasted no time and we headed down to the rather brilliant boat that is docked next to the Maximum Pressure stage.

The boat was hosted by the Forty Clothing brand and what a job they did of hosting that space. It is a fantastic galleon ship that had a bar downstairs and DJs towards the front of the ship. Some of the surprises of the night were found in the dark doldrums of the boat (and I do not mean that in a crude way). Some of the local DJ talent on show was superb and some of the music played resonated perfectly with me and my fellow ravers. The boat certainly got a little crowded when the heavens opened and was often a welcome solace from the pretty harsh wind and rain that would swoop down the Clyde through Saturday and Sunday. 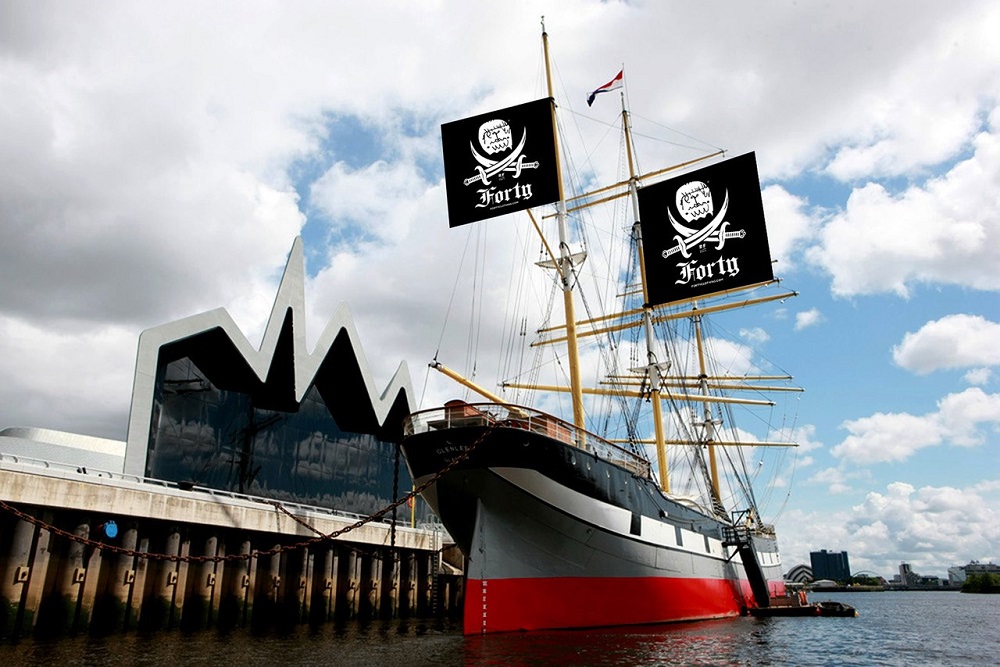 On the Saturday we spent most of the day mooching between stages and catching snippets of DJs here and there, as well as diving on and off the boat to try and dry out from time to time. I managed to catch most of FJAAK’s set on the Feel My Bicep Stage, and they certainly did not fanny about at all. They played some of the most driving and savage techno of the weekend and I loved every moment of his set. FJAAK is made up of Felix Wagner and Aaron Röbig who describe themselves as a “techno boyband”. Put it this way if boybands played music like this I would be attending the likes of Take That and Boyzone whenever I could. Real top performance and some of their stand out tracks on the day were ‘Drugs’, ‘Quilmes’, and I am sure they played their recent remix of ROD. Well worth checking out if you get the opportunity.

After FJAAK had finished and nearly melted my brain we called it a night as we wanted to be on top form for the Sunday, as the lineup was even stronger. Plus whilst up in Glasgow, I thought I would be a good chance to go and grab a curry at a great place called Mother India up by the Gallery. A fair walk in the weather but it was well worth the commitment!!! 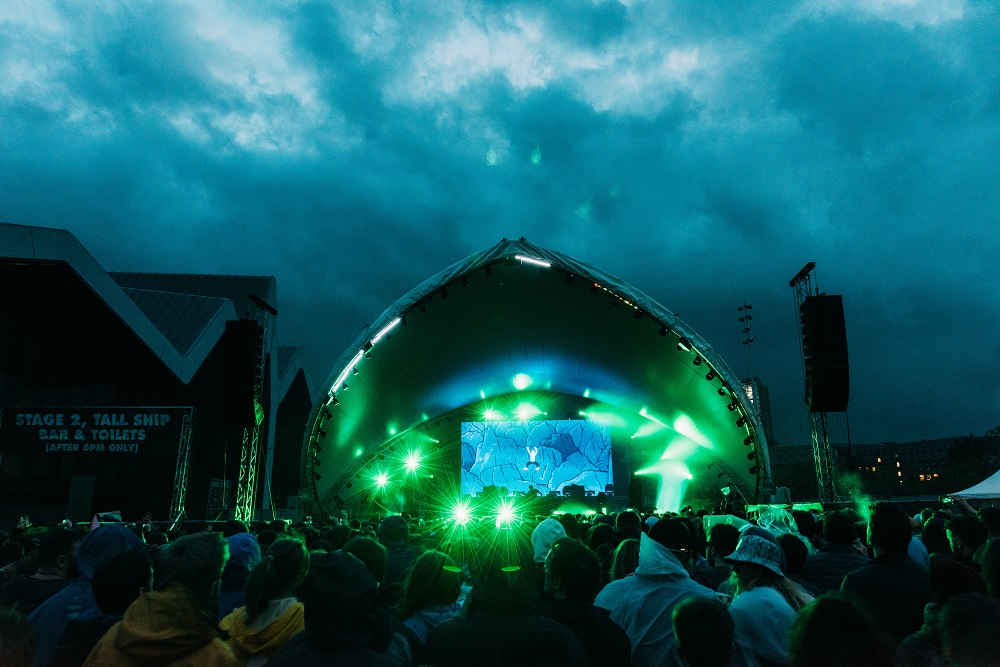 Saturday started in fine style with a great Scottish Breakfast in the hotel and then Jade and I headed over to Pete and Stacey’s flat where we met their mates who were all absolute legends and had a wee pre-party before we made our way down to Riverside Festival for day two of techno. To say the weather was bad on the Sunday is probably a massive understatement. At points, it was truly awful but that did not stop us or this Scottish crowd from being well up for whatever was thrown at them. SLAM and Daniel Avery back to back were one of the highlights. The three of them on stage was a sight to behold as they laid down some savage and relentless techno. Straight after their set had finished it was straight into Âme and Rødhåd which was as you might expect, a little relentless. The pair worked the crowd in the pouring rain and took them through an entourage of acid laiden and industrial sounding techno. In all honesty, I have never heard Âme play so hard, and it was something I will certainly be hoping to hear again soon. I personally feel he plays far better with an increased BPM range! 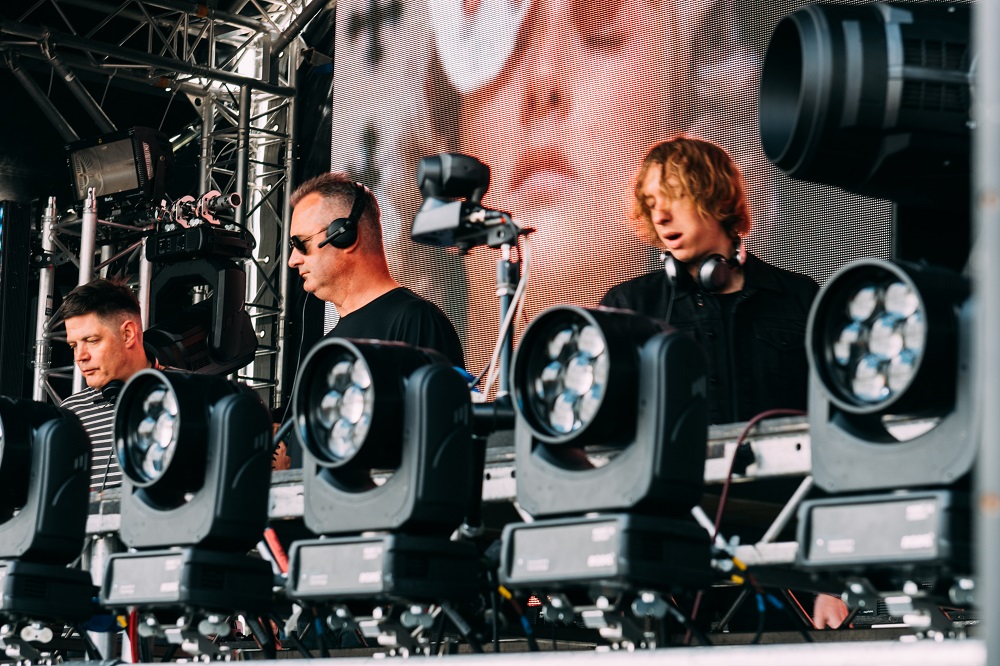 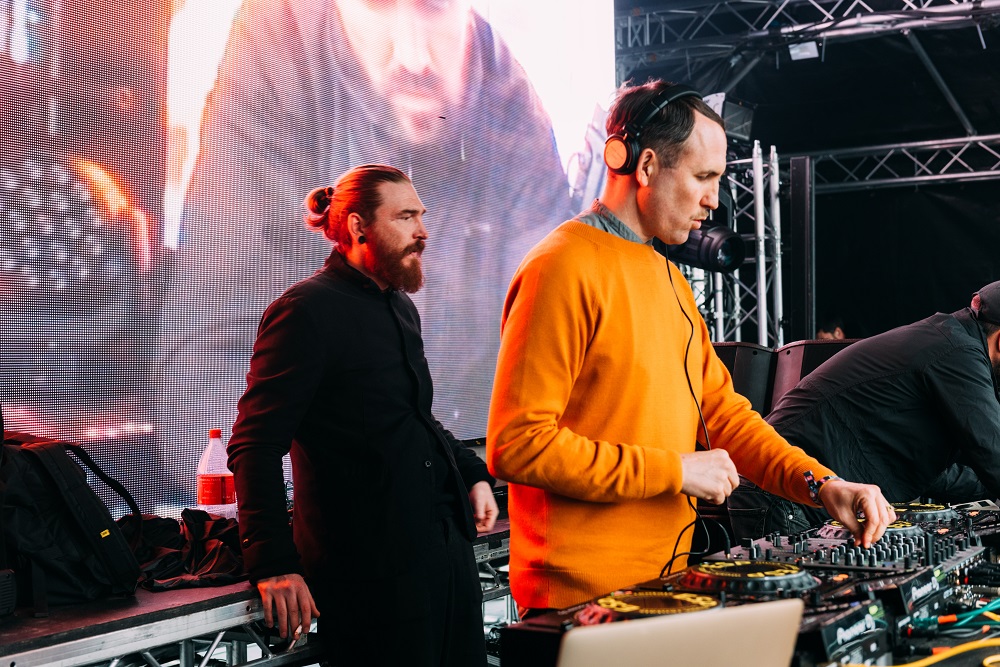 It was then time to make a decision. Do we stay for Jeff Mills or catch then end of Bicep followed by Jon Hopkins. For those who know my style of music and love for melody, it was a simple (ish) choice. We trotted off down to the Main Stage and caught the end of Bicep who were creating a great vibe and rocking their signature sound. As their set ended it was time for the man Jon Hopkins and there was a definite vibe of excitement and intrigue as the lights raised and the warm melodies began to fill the air. One the of the difficult and somewhat most satisfying thing about writing about Jon Hopkins’ live set at Riverside Festival is that I have no idea how to label his music… some may call it techno, some may call it breaks, some may call it leftfield, or even modern classical in some aspects. One thing for sure is that it is definitely not bloody “business techno”. I am simply going to refer to his music as incredible and mind altering.

The complexity of Jon Hopkins’ music is mind-boggling and sits above many of the producers out there, almost on another plain. He is a master of his craft and definitely sits alongside the likes of Max Cooper and such like when it comes to the quality of his productions. He effortlessly weaved through tracks including ‘Open Eye Signal’, ‘Collider’, and ‘Emerald Rush’ with an intelligent finesse. His tracks always have an air of beauty and euphoria about them with that underlying tone of deep and dark edginess. The kicks from those broken, almost off time, leftfield sounding beats were savage and he had the crowd in the palm of his hands all night. They were simply lapping up his every tweak of the live setup. The level of performance was awe-inspiring and when he played ‘Singularity’ things just exploded. If you have not heard this track you can listen below… I can only speak for what I saw and felt myself but my mind went into overdrive and I think I even had an almost out of body experience when ‘Singularity’ was played! I know my fellow weekend ravers were on the same page and at times almost looked puzzled by what they were listening to.

If any of you have been to Riverside Festival you will understand how good it really is. It is a relatively small festival in comparison to some out there but it is a very friendly vibe filled with great people, and it is so easy to get around to each of the stages. Another thing that struck me was how reasonable some of the beer and food prices were in comparison to other festivals. I can not recommend Riverside Festival enough, and if you like your techno and live acts I would certainly add it to your list for next year which I believe will be their eighth year of running the festival. Get yourself up to Glasgow and check it out, it is a great city filled with fantastic folk who love their techno.

I would personally like to thank Jenn and Lydia for looking after Jade and I, Pete and Stacey for being lovely hosts, and love to Stuart, Sassia, and Stevie for some great banter and good times. Finally a huge thanks to all the artists and staff involved, I will certainly be looking to head back in 2020.