US studios SHoP Architects and Gensler are among eight practices that have created concept designs of “skyports” for Uber, which will be hubs for both ground-based and drone taxi fleets.

The Uber Air Skyports are designed as “fully considered and technically feasible” buildings that give an idea of the structures the taxi company aims to build ahead of the commercial launch of Uber Air – its app-based flying taxi service – in 2023.’

“With the first launch of Uber Air just a few short years away, this collection of Skyport Mobility Hub concepts establish a practical, sustainable vision for the infrastructure needed in the communities we plan to serve,” said John Badalamenti, head of design for advanced programmes at Uber.

The concepts have been envisioned for Dallas, Los Angeles and Melbourne – all cities where Uber has already announced it will be launching its aerial taxi service. 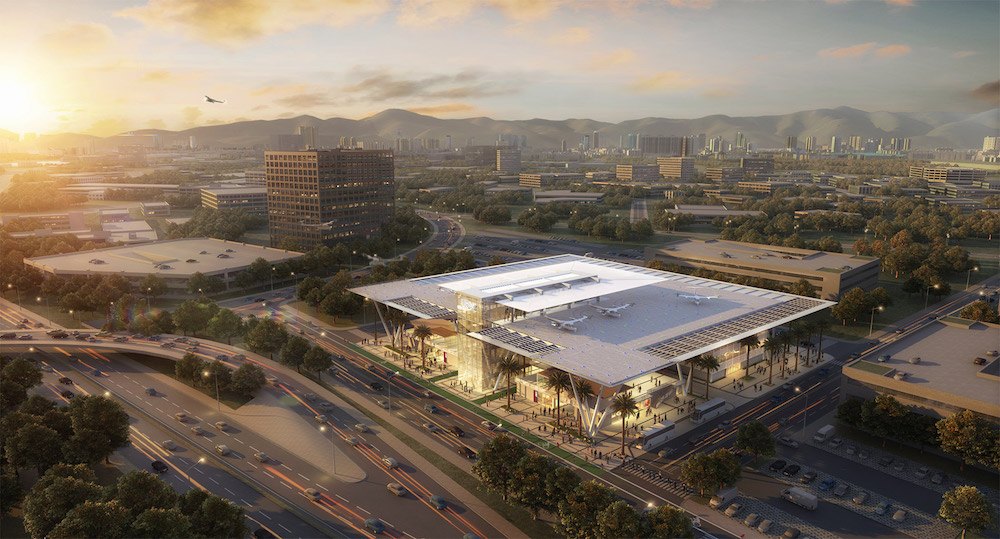 Each of the concepts is designed to support both its current ground-based fleet of taxis and future aerial transport. Last year Uber released a drone-like prototype for an aerial passenger vehicle that it intends to bring into operation by 2023.

The proposals all include space for electric bikes and scooters, charging points and spaces for electric vehicles, and public transport connections.

“These designs represent a synergy of purpose, orchestrating a seamless transition between ground transit like Uber Pool and eVTOL [electric vertical take-off and landing] aircraft on the roof tarmac – all while contributing to the surrounding neighbourhood,” explained Badalamenti.

The designs were revealed at Uber’s annual Elevate Summit. The first set of concepts depicting the future air-taxi hubs, including a giant cylindrical tower and stacked landing pods, were shown at last year’s summit.

Drones and flying vehicles are increasingly being integrated into cities. Dezeen’s documentary Elevation explores how Drones will transform the ways that people and goods are moved around our cities.

Video flythroughs of all eight Uber proposals are below:

Alter-Projects is thrilled to present Art Extravaganza, a public art trail, which celebrates, honours and reflects…