Drum & Bass music, once an underground movement, now sits firmly on the global stage. Continuing to channel its melting pot origins, the genre flexes a diverse mix of styles, visually translated within the accompanying creative.

Enhancing stand-out in a crowded, super accessible music arena, this creative plays an integral and essential part in the magic of the end product; whether it’s being delivered via digital platforms or on tangible traditional vinyl sleeves (a recent resurgence in that format firmly led by the genre itself).

As both a designer and producer for that genre I wanted to highlight some of the creative visual alchemists in the scene. What follows isn’t an ordered, exclusive list of who’s who. Simply an indulgent homage and unapologetic fan-boy type admiration of designers who I revere and who have not only influenced me personally, but artists that I feel have visually enhanced the scene with their super dope creative output. I think you’ll agree when you see their work 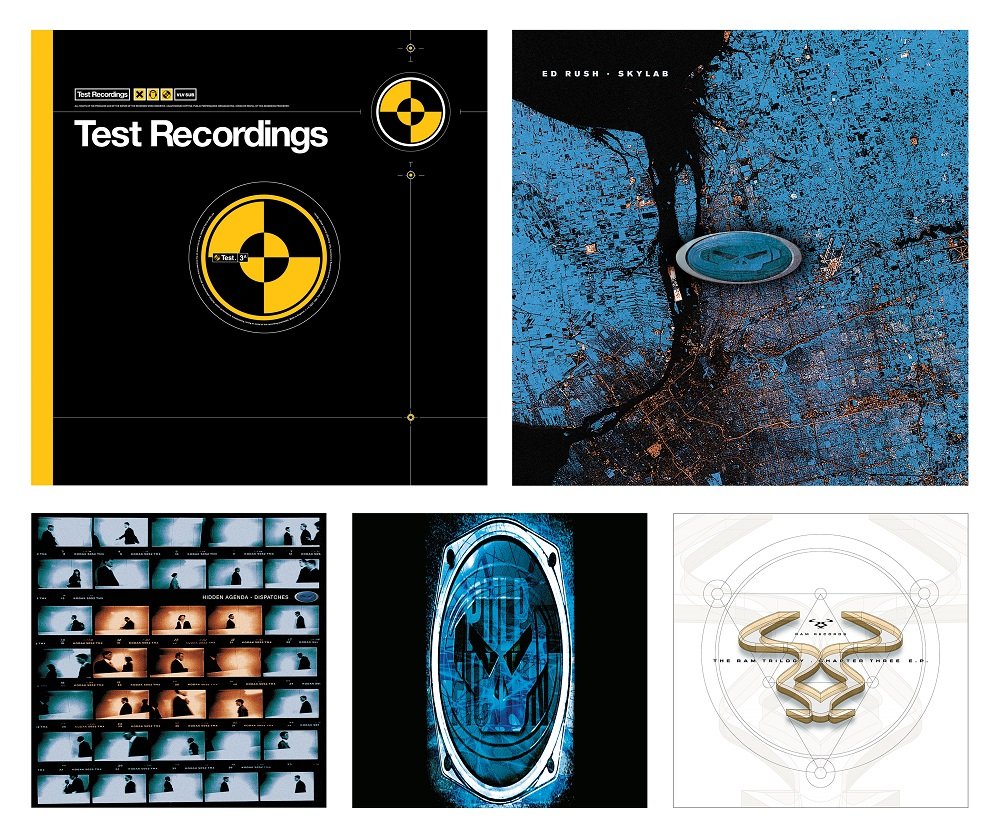 Jon is one of the Godfathers of Design for Drum & Bass. After replying to an advert in Viz Comic, he landed a job first working at the seminal Rising High Records and then at Vinyl Distribution (UK’s leading underground music distributor at the time); proceeding to be on design duties for over 20 prolific labels including Metalheadz, Ram, Good Looking, True Playaz, Exit, 31 Records… and that’s just me dipping my toe into the list.

His pivotal designs were influenced by the likes of Neville Brody (with his experimental FUSE typography projects), and also The Designers Republic. What Drum & Bass heads may not know is that the skull used on the front of the Grooverider’s legendary ‘Prototype Years’ album was donated by a local hospital.

“I walked over from my office and asked if they had an old x-ray I could use on an album sleeve. A thoroughly confused doctor agreed to hand one over. I have no idea who’s head it was!” 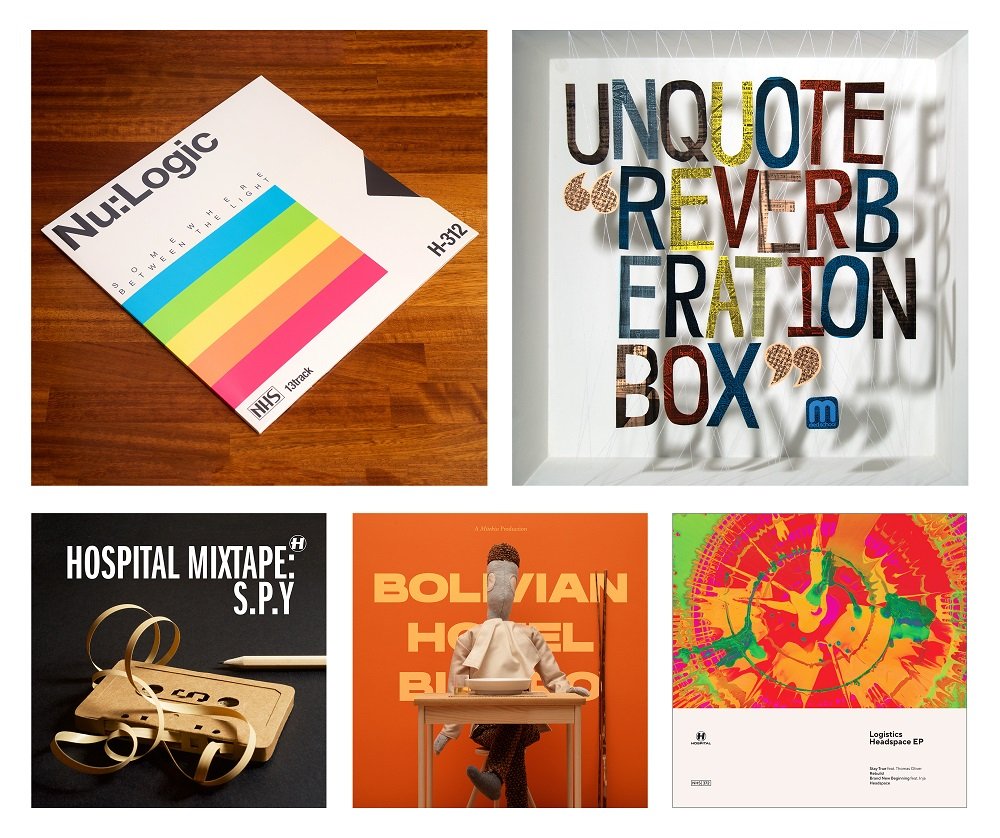 Ricky’s epic journey into design began in his teens, after reaching out to John B on Dogs on Acid forum. “They say that on the internet, nobody knows you’re a dog, and he didn’t realise how young a teenager I was – I wasn’t even old enough to come out to his gigs!”

Working with Hospital Records, from its humble Shoreditch beginnings to shows at Brixton Academy (where luckily he didn’t have to sneak with fake I.D. anymore), Ricky’s ethos has always been to have fun with it all and
never try to take it very seriously.

“I particularly like working outside of the computer using practical effects… I try not to follow trends – I just really like the process of making things, however I can do it.” 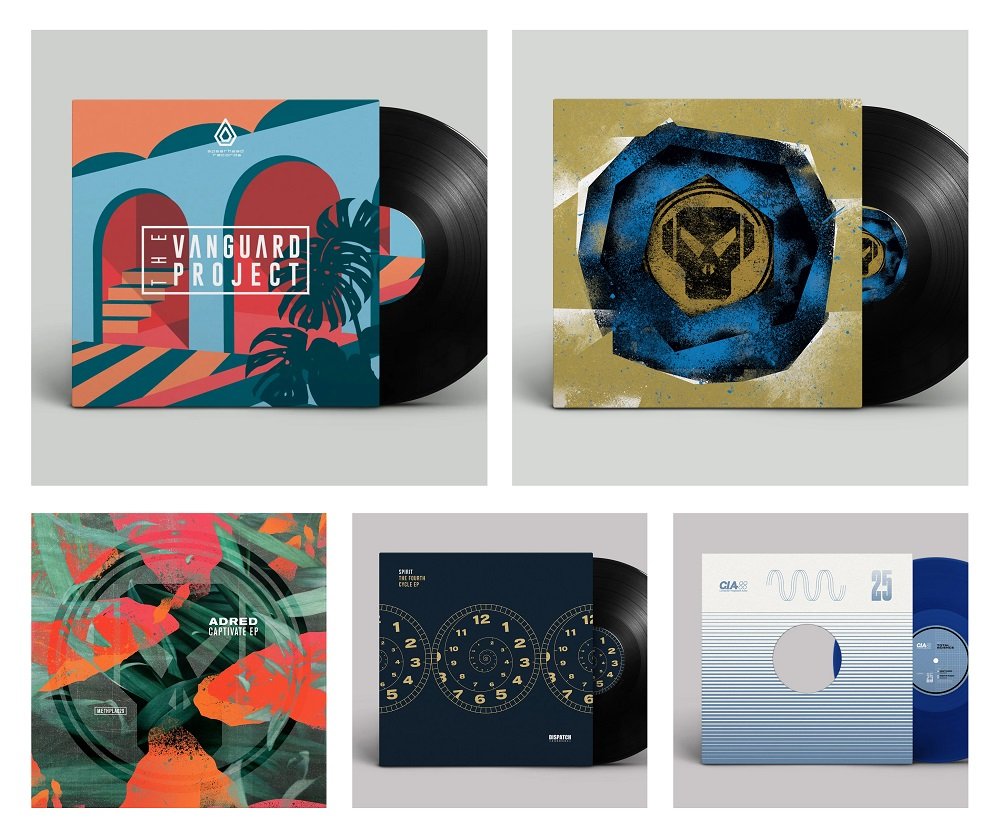 Everything started in the late ’90s for Italian Graphic Designer and DJ / Producer Simone. Working on his own musical projects (under the artist name of Arpxp), his visual flair took the form of flyers and artwork for not only his own self-released music and events in his hometown Cagliari (Sardinia) but for many Drum & Bass promoters across Italy; providing graphics for festivals and top-billed club nights with the likes of Hype, Pendulum, Noisia and Roni Size on the line-up.

Following that, his role as Art Director flourished, giving him the opportunity to be more involved in the creative process on campaigns for Labels including Sun And Bass, Spearhead, Metalheadz, Dispatch and CIA Records.

His influence stretches wide; ranging from the iconic Bauhaus Movement to Graffiti.

“I hate when I have to say ‘no’ to the artist’s brief. It’s happened quite a few times. The dialogue between music and visual design can be tricky sometimes.” 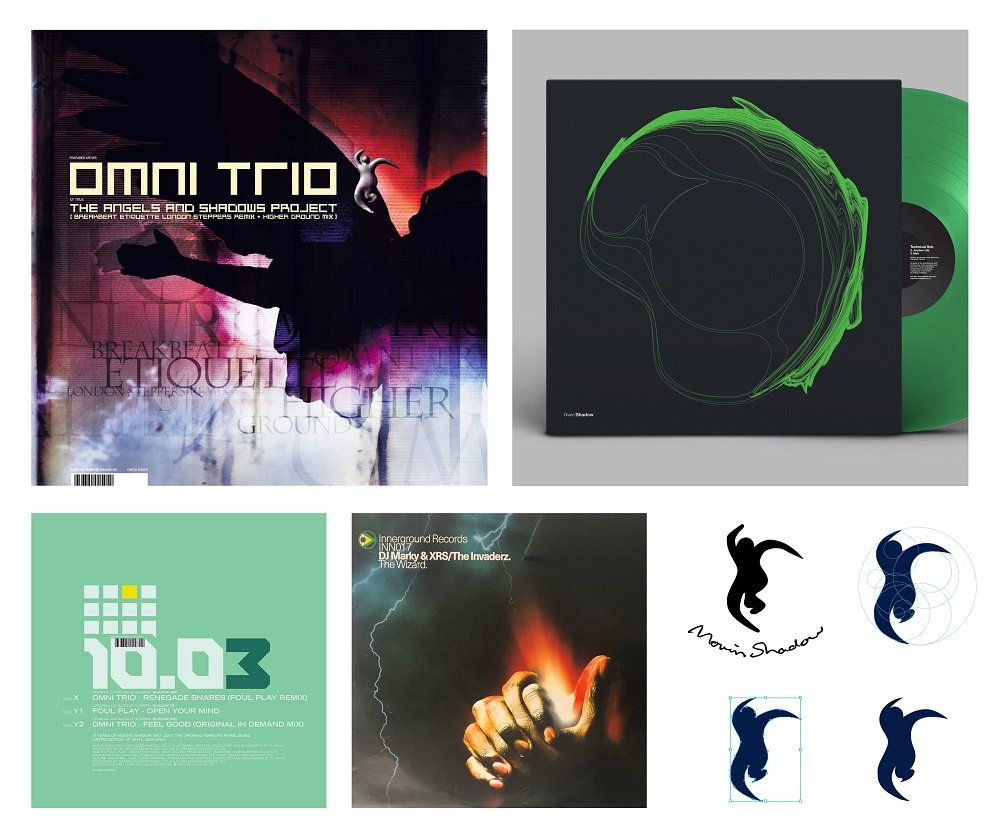 Another creative pioneer in the scene, Gary first ventured into sleeve design after meeting Sean (of ‘2 Bad Mice’ fame) whilst on an HND Graphic Design course, who asked him if he’d be up for doing a few sleeves. 30 years later, Gary unleashed his visual alchemy for labels including Moving Shadow, Over/Shadow, Charge Recordings, Innerground Records and V Recordings; for a plethora of legendary artists on the 200+ Sleeves, he’s had his creative hands on.

Gary’s been influenced by many design studios over the years including the Designer’s Republic, Build, Attik, Stylorouge and Territory Studios.

“I guess it was less about trends, but more what seemed right for the project at that point in time… and at times working closely with the artists on projects to help realise their visions and ideas… It’s always been an opportunity to explore new ideas and styles I’d never normally get to do and to be back doing it again for Over/Shadow, after a break of about 10 years… well… it’s awesome.” 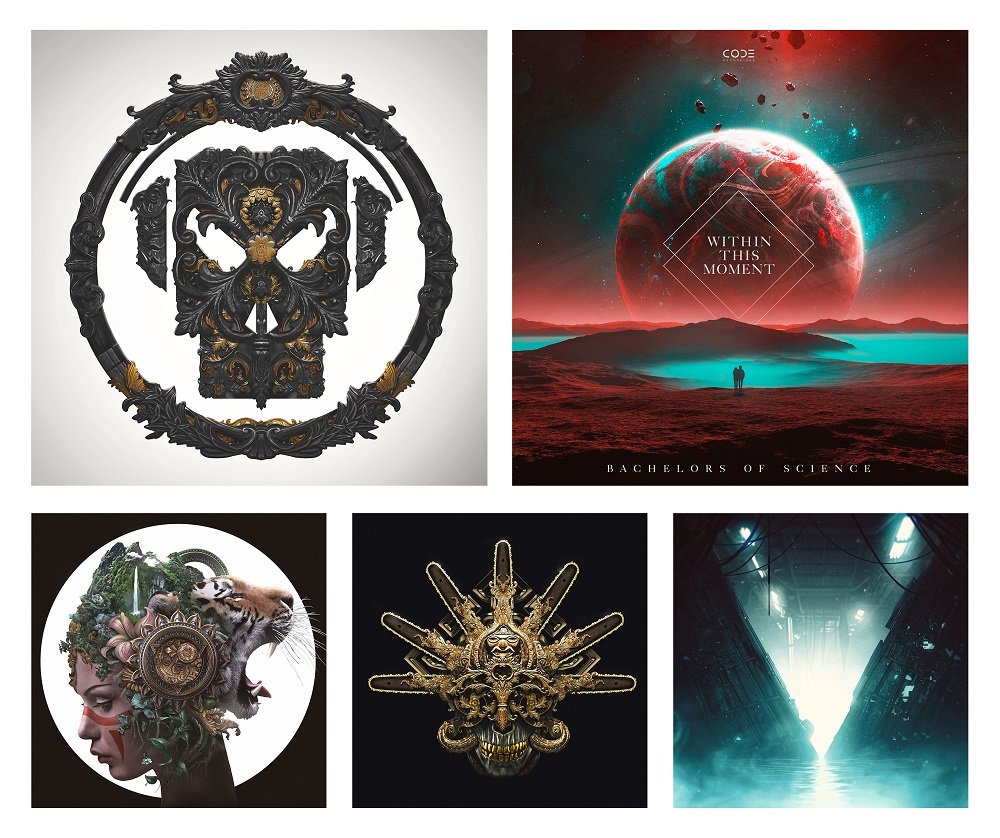 Drawing on the mood from the dark corners of Seattle and Denver, his often macabre imagery creates a dark narrative of the modern urban experience; in both his design for music labels and for his creative output under the moniker ‘Grym’.

As Manager of Experimental Bass Label ‘Onset Audio’, Seth draws a close parallel in the creative process of both design and music.

“What I found as I got deeper into the process and software [of music production] was that it was very similar to designing in Photoshop. You have layers, you have plug-ins, you have samples. And the artistic process of trial and error definitely had parallels.” 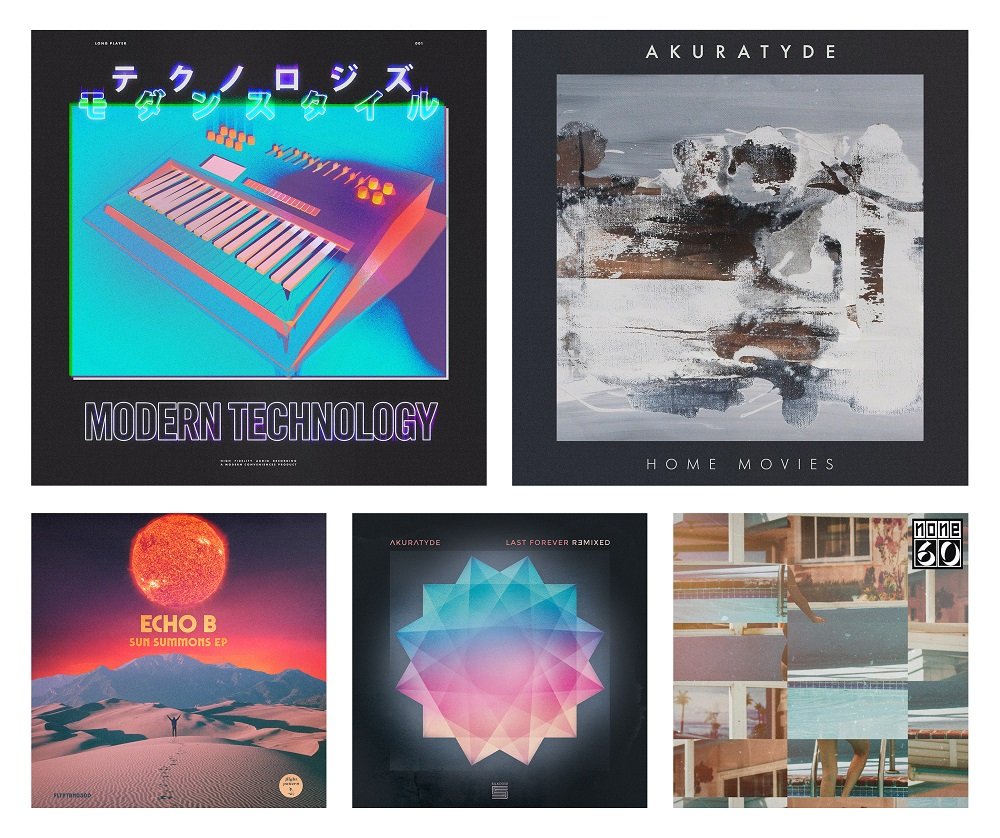 Hailing from Southern California, Dan’s been flexing his design skills since 2016. Leaving his corporate job to focus solely on music and design, he’s since been creative for labels including Blu Mar Ten Music, Cosmic Bridge, CNVX and None60; creating artwork almost exclusively for the music industry, alongside releasing his own Drum and Bass Music as Akuratyde and running his own label Modern Conveniences.

With a background in both design and music, his process for both is very similar; initially sketching out ideas in both mediums, with multiple iterations of ideas, whether it be different colours or bass lines – tweaking and refining until he lands on the version he’s ultimately happy with.

“I don’t follow a lot of current design trends but one I have been following is what I’ll call the “cyberpunk” look.  Travis Kane is my favourite designer in that style. I also like Mishko a lot. I don’t like copying someone else but I pull a lot of influences from that style for my own label”.

Matt Loomis is a seasoned London-based designer, having worked on campaigns for labels including Metalheadz, Playaz, Ganja Records, Frontline and Architecture Recordings. He is also a music composer and Drum And Bass producer, with music releases on seminal labels including Architecture Recordings, Machinist Music, ILR Studios, Modern Conveniences, Locked Concept and Ronin Ordinance

In the first two decades of the 21st century, few have controlled the cultural weather…