Based at the former Chicago Rock site next to Brunos Rodizio bar and restaurant, St Austins Lane, Club Deco’s opening party will be held on the 7th September with an all nightery from 10:00pm—6:00am. Introducing new weekly Saturday night House event Manifesto, the opening party features guest DJ and Hacienda legend Graeme Park and an icon of the UK’s club scene. and Jon Pleased Wimmin who returns to Warrington after previously playing at ‘A Very Important House Party.

After celebrating ‘old skool’ club classics at Reminisce Festival, music-lovers can continue partying through the night at the festival’s official after-party, which takes place just ten minutes away from its location in Sherdley Park. Festival wear is welcomed due to the festival and due to Bank Park’s Glastonferry, which occurs on the same day. To celebrate the opening night to the fullest, Club Deco have obtained a special late license until 6:00am. 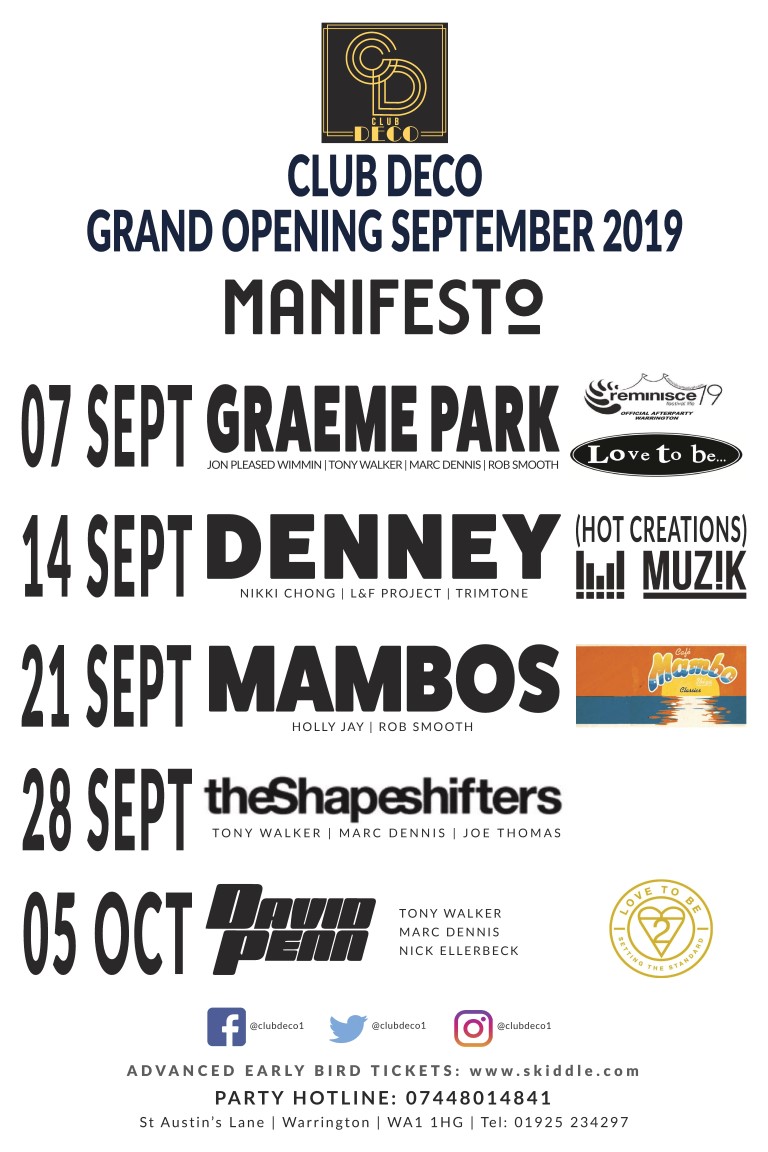 Adept have programmed a comprehensive flagship Saturday night to cater for all electronic music lovers tastes with Manifesto presenting renowned brand Love To Be…, who have toured the world, playing at the likes of Space, Pacha and the Ministry of Sound taking up the first Saturday of each month, Denney(Elrow/Hot Creations) follows on the 14th Sept for Muzik. The weeks following present an all-star line-up featuring a true taste of Ibiza on the 21st with the iconic Café Mambo tour, The Shapeshifters (Lolas theme/Glitterbox) finish off September on the 28th and eminent Spanish DJ and producer David Penn (Defected) plays on the 5th October.

Tickets for the opening event can be purchased either on Skiddle or direct from Bruno’s Rodizio. For those interested in attending the event or for more information, please visit Club Deco’s social media, or alternatively call 01925 234297.

About Club Deco:
Club Deco inside Bruno’s Rodizio is a bold reinvigoration of Warrington’s music scene. Once Chicago Rock, the venue now features modern, high-quality sound and lighting systems, as well as mirror balls and special effects and CO2 cannons. Future nights will also feature skilled performers and dancers. Guests who purchase VIP tickets can access the exclusive VIP balcony, which features its own luxury entrance bar and green room and views of the dance floor and DJ booth.

Club Deco aims to be an active and impactful club and event space that brings Warrington back to the forefront of the clubbing scene. As well as hosting Manifesto every Saturday, Club Deco will operate on two other nights weekly, including a eclectic mix of Fridays and a new student Thursday ‘Skint’ launching on the 19th September

BLOND:ISH drops anticipated edit of Foreigner ‘I Wanna Know What Love Is’