We sit down with  Robert-Jan Wille, head honcho of one of the coolest / craziest / most busy organizers we’ve met in a long time, 3Gram.  Situated in Alkmaar, where 3Gram started, we talk about why they started, challenges they faced, funny incidents and his dream line-up.

How did the (drug related) name come about?
It’s because when we started, if people thought about the house and techno scene almost everybody linked it to drugs. We chose the name because our parties and the music we produce are known to cause a natural high. If you come to a party with us, you definitely don’t need 3 grams. We make sure that your body produces enough endorphins that no drug can match…

What led and influenced you start your own club night?
Every weekend my brother Mark and I along with our close friend Paul Simmonds went out to at least 3 or 4 parties. Amsterdam, Rotterdam, Utrecht, no place was safe for us. We noticed that after a while the parties got a little boring and repetitive. We figured that, if we wanted a party tailored to our needs, we had to organize it ourselves. So in June 2008 we organized our first event. It was hosted in the second room of a big club in Heerhugowaard, next to Alkmaar. It was a huge success and our room was packed all night. After that one, we got a taste for more and moved to Alkmaar. We organized a party (Milligram) in a little club. The attendance was so overwhelming, we had to send more than 150 people home as it exceeded its capacity. We organized around 8 parties in that venue; one of them was ‘Come to Grammy’ on one Sunday afternoon. People got served an old fashioned Dutch dish around 7pm and the place was transformed into a living room, similar to what you would see at your grandmothers’.  After that, we got called by Podium Victorie to do a party there. In July 2010 we did the first party there called ‘Gramdioos’ with 300 attending and proving to be a success. Since then it has grown and grown to the stage of selling out nearly every time.
When we started throwing parties it was all about getting the numbers but for us, it’s more than that. Everything has to fit the party i.e. venue, decoration, music and most importantly the people.

From past experiences what have been your biggest challenges when putting on a night?
What was most difficult, in Alkmaar there was really no ‘scene’ to begin with. There were some events and promoters, but none of the events were very successful. So in that way we kind of had to start from scratch. This meant most of the people still needed to be educated about the kind of music and parties which we wanted put on. As a result we always had to look very closely at the line-up to make sure it would fit with local scene. Most artists that we really wanted to book were just too ‘experimental’ for Alkmaar that time.  We had to take it slow, step by step. If you look at our recent line-ups, you see that we’ve come a long way already.
The people in Alkmaar and its surrounding areas are not very open-minded at all. They prefer to stick with what they know. With that in mind, we knew it would be a big challenge for us, to find artists who played music that is very similar to the music they know.  But we wanted to push the boundaries a bit, to make sure these artists also played music they did not know too and to encourage them to being a little more open minded.  We are not where we want to be just right now, but we have come a long way in Alkmaar and we are very proud of that!

Are there particular gigs you enjoyed especially?
Last year we celebrated our 5 year anniversary with a weekender. It was ‘Gramdioos’ party that lasted for 3 days. This whole weekend was amazing but the Friday was truly legendary. Everybody who was there would all agree. We had KiNK doing a live act and there was a very intimate crowd. Actually it was the best received set with the least amount of visitors. We would like to thank everyone for coming to support us and making it a magical night. When I think back to that night, I still get goose bumps all over. Especially now knowing that KiNK had sky rocketed not long after that. The chances of experiencing such an intimate night with him again are very slim. If I could go back in time right now I would certainly do so!

Besides that, Queens’ day for the last 3 years has been amazing. There’s always so much energy from the crowd that makes all the work worthwhile and for this were are so grateful. There is finally a proper dance event in Alkmaar during these calibrations, which makes us proud and I have to admit, there was the occasional tear of joy.

Other performances that really stick out of my mind are, the first appearance of Marco Faraone on ‘Gramdioos’ who really tore the place apart. And of course Audiowomb who brought down the house and Alkmaar with it and was actually our first sold out gig.

Any funny incidents or moments which always bring a smile?
Not so much funny, but a little embarrassing. We booked a big well known DJ to play peak time slot. He got very very drunk and when the last warm DJ of the night was about to finish his set, his asked him (warmup DJ) to play back 2 back? What happened after that was incredible. The DJ played some hip hop records and would not stop playing them. Nobody liked it, except the DJ himself. Everybody went home ten minutes early, the lights went on and there he was still in the DJ-booth with the headphones on, dancing to his unwelcomed hip hop tracks. To be honest we didn’t really know what to do or say.

Are you guys thinking about expanding your brand maybe abroad or hosting a tent at a festival?
We’re currently working on two other ideas, both in Alkmaar, including a deep house night. We are hosting a 3Gram / Gramdioos stage at Obsession Outdoor festival as well this summer, which we are really looking forward to. We are also talking to some venues outside of Alkmaar for our parties, so some very busy times ahead.

What is your dream lineup for a 3gram night?
It is difficult to give you a total dream line-up but certainly can name some of my favorite artists D-ribeiro, Rene Engel, XDB (To my opinion one of the most underrated DJ’s out there), Dixon, Sven Väth, Henrik Schwarz, Jeff Mills, Minilogue, Laurent Garnier, Nicolas Jaar, Robag Whrume, Space Dimension Controller, KiNK and Darkside. The list could go on and on.

February 8 is your next party, tell us something about that, we saw that Patrice Baumel (a TIP favourite) is headlining?
We are very proud to have Patrice as a headliner. It’s takes a special DJ that truly takes you on a journey. It’s sounds something of a cliché, but that’s what Patrice does, he really delivers on that promise. We also have David Mayer, a great DJ part of the Keinemusik crew and local heroes Hightower, Julius and Electric Twins. (https://www.facebook.com/events/609481605766317/)

You too are a DJ; do you play a lot of your own nights?
No, not really. We are very picky when it comes to who we book at our own nights, because we try to host the best party possible. That means we have to be very critical with whom we book. I always look to MC a little at our events. I think a MC is very important and you could do it wrong very easily, but I try to grab the mic once or twice every hour, just to put some extra energy in the crowd. I have a very particular style of MC’ing and it fits our own party perfectly I think.

Thank you Robert-Jan for the interview, do you have any last words for us?
“Music is the last bit of magic left on earth”

This Is Progressive Radio

The Cure / Of Norway – A Forest [Jaap Ligthart Edit] 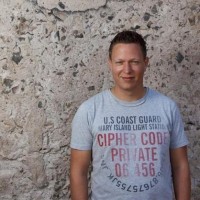